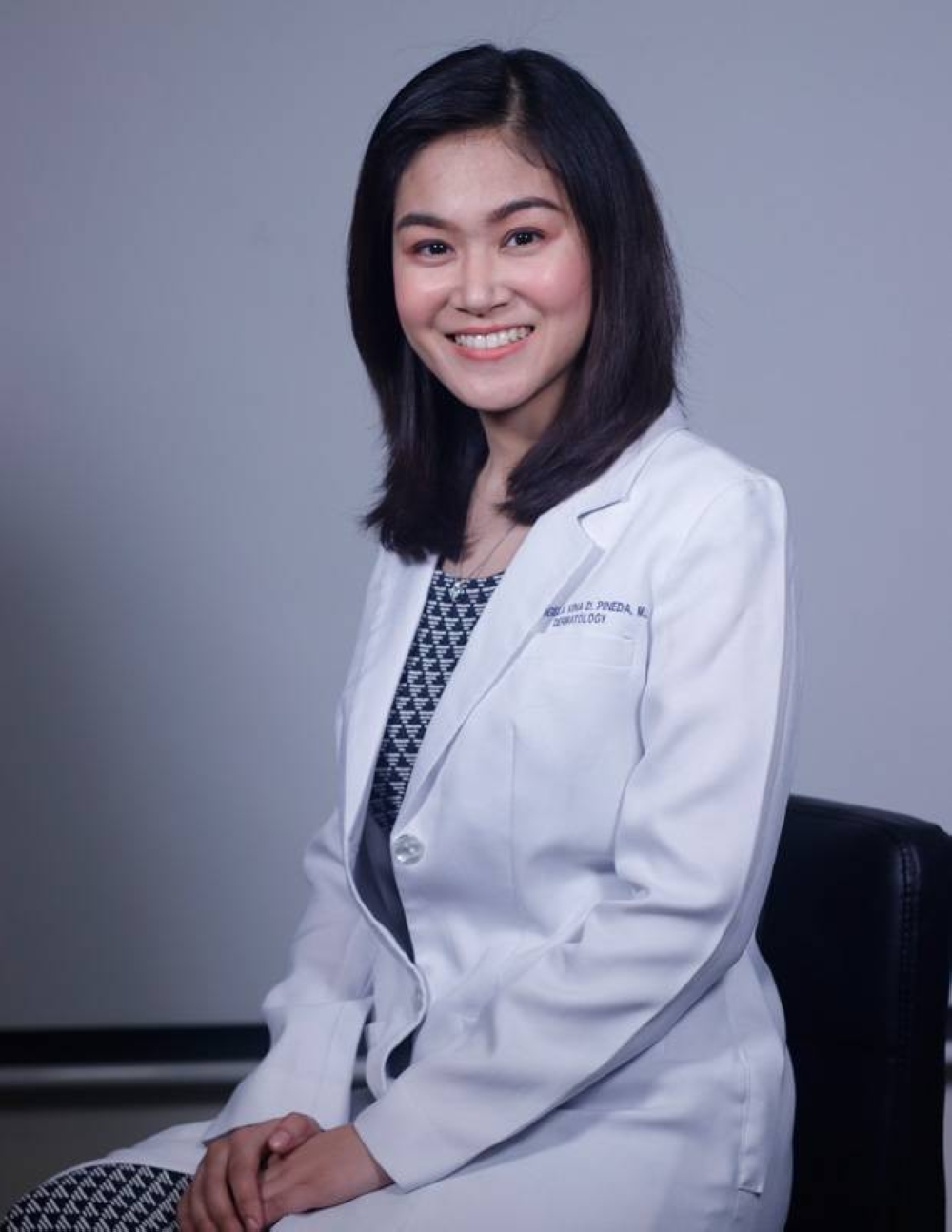 “Patient care is our priority. We serve everyone with compassion and excellence.” 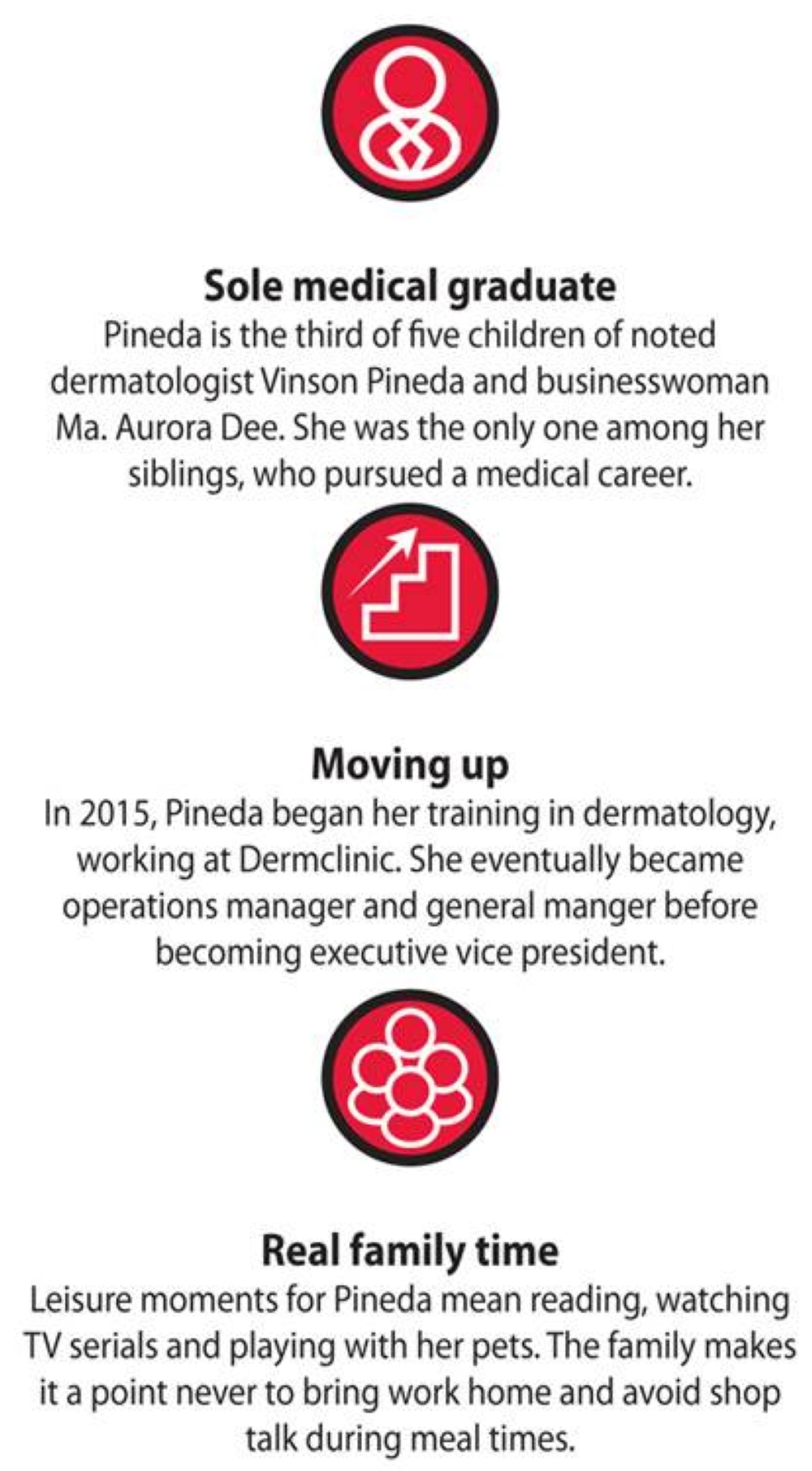 “My father didn’t tell me how to live; he lived and let me watch him do it” — Clarence Budington Kelland

That quote Dr. Angela Vina Pineda learned early on from her dad, noted dermatologist Vinson Pineda and founder of the 50-year-old Dermclinic. Never verbalizing the challenges and struggles he encountered in building the business, he simply epitomized the result of hard work and dedication to an impressionable young girl.

“He was never a show off,” Pineda recalls. “I saw him waking up early to pray. I witnessed him studying hard and doing his research and spending hours in the office and in the clinic.

“My biggest learning from him is that I should trust the Lord and always seek His direction. The company is God’s blessing to him and with it, we also continually ask God to help us know, build hope and support our employees and clients. We believe that in the same way that we have been blessed, we are also to bless others.”

Following in her parent’s footsteps had always been a no brainer for Pineda. The third of a brood of five children, she was the only one who pursued a medical degree. “I wanted to become a doctor, but hadn’t decided on the specialization when I entered medical school,” she says. “There was no external pressure, because my dad did not really compel me to work at his office prior to me finishing medicine.”

Pineda took up biology at De La Salle University on Taft Avenue, Manila, going on to medicine at the University of Santo Tomas (UST). “It was a path that I believed I wanted,” Pineda says. “Maybe, my younger years in the clinic and me being exposed was a part of it, but it was never forced.”

Pineda was not even a speck in her mother’s womb when Dermclinic opened in 1971. But her father’s influence was always strong. She says: “I became his assistant in the early years after my graduation in 2014. At first, I was uncertain. It was an unknown territory for me because I came from a science-medical field, so I had no idea what I was getting into.

“I learned to be patient. I took the time to learn the ropes. I read my dad’s books, I watched him lead meetings, and I was also given the opportunity to go around different departments — accounting, finance, marketing, sales, purchasing and even plant operations.”

In 2015, Pineda began her training in dermatology. “I then worked in the clinic, and I was taught the essentials and skills in dermatology,” she says. “A few years after that, I volunteered to help out in operations. I became the operations manager, then general manager for Dermclinic.

“I seem to be the one who took after my dad the most. I have been his constant companion in numerous medical conventions. I watched him work. My mom [Ma. Aurora Dee Pineda] is not in the medical field, but she helped start the business. However, she now stays at home to take care of the family.” Dr. Pineda encouraged his daughter to take a master in business administration at the Ateneo de Manila University. “That helped me a lot in seeing how and where things should be taken to,” she says. To date, she is waiting to complete her oral defense.

It was during the onset of the Covid-19 pandemic that Pineda, as executive vice president of Dermclinic, was allowed more liberty in managing. Nevertheless, she stresses that all of her decisions “are aligned with the company’s direction and plans.” 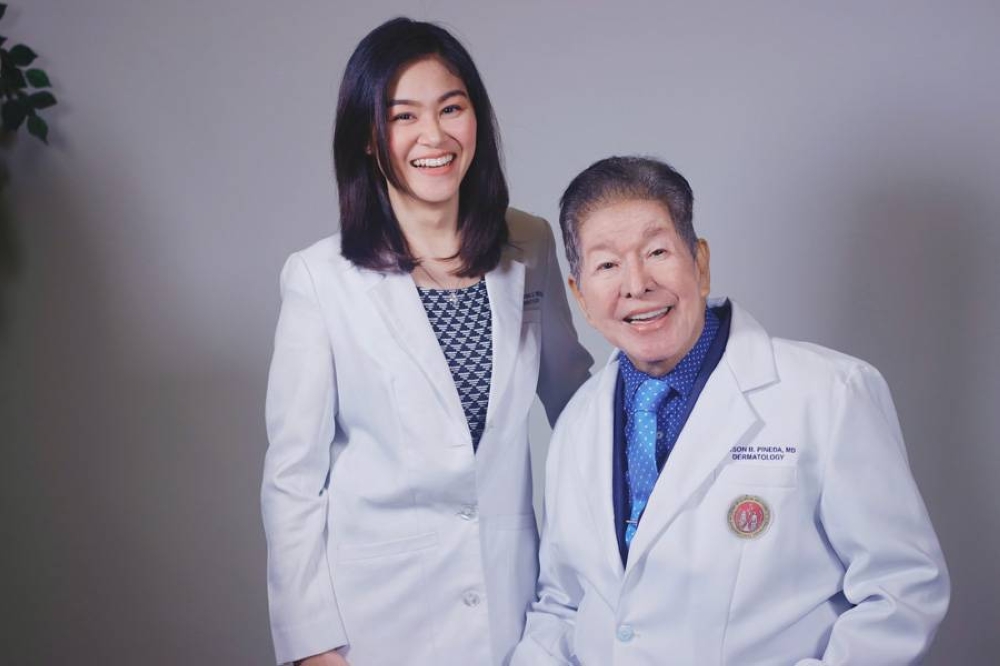 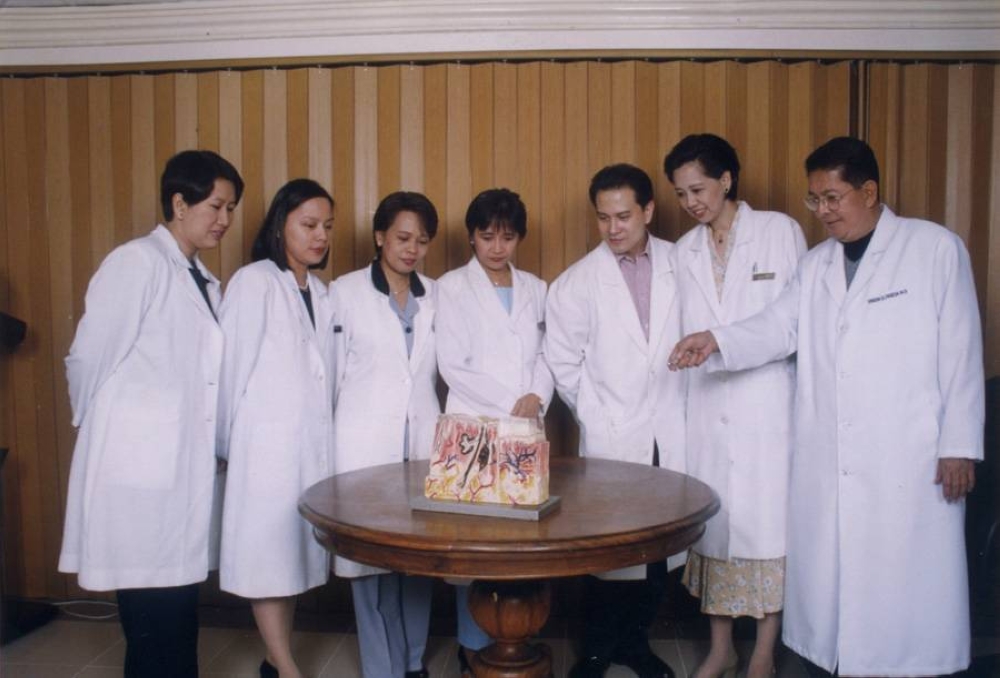 The Dermclinic founder (rightmost) and lecturing to his staff about hair and scalp treatment. CONTRIBUTED PHOTOS

Maintaining the patronage of Dermclinic’s customers, a roster that includes prominent personages, celebrities, as well as ordinary citizens, has been the enduring imperative for Dr. Pineda, his daughter and the entire clinical staff. “Dermclinic stays true to its promise as the dermatology center that patients can count on for their skin and hair needs,” Pineda says. “Patient care is our priority. We serve everyone with compassion and excellence.

“When I first became a doctor, it had always been ‘to help people.’ That might seem like a cliché but it is still true with being a dermatologist. We want to help people get treated and rediscover the beauty and confidence they can have in their own skin.”

Dermclinic has evolved through the years, built on the foundation of medical and clinical dermatology. “Excellence and skill are what our our dermatologists have been known for. Our philosophy remains rooted in the value of caring for patients, Pineda adds. “The clinic has grown, not just by focusing on science and adapting to trends. We understand the value of ensuring the right foundation, but also incorporating innovation and thinking of better ways to serve and treat our patients. They and our staff are like family.

“We believe that we should be able to give our patients value for money. We want them to be satisfied and to relax when they visit the clinic.

What Pineda enjoys most about her job is engaging her patients. She explains: “There is a depth in building a relationship with a patient that starts with just listening and allowing them to open up and trust you with their skin problems. Sometimes, they feel conscious and fearful because it is visible. Being able to help them get over their worries and recover from stress is a way for us to help them.”

Operating in the new normal, Pineda acknowledges the biggest challenge has been the lack of personal contact – finding ways to reach patients due the lockdowns. She says “Since we know that their skin problems do not just go away. We have built in and strengthened our connections with our clients through online channels and Viber groups. We want to ensure that we are able to follow up their treatments with them. We also offer online consultations.”

The challenges notwithstanding, Dermclinic vows to move forward on its golden year. Says Pineda: “We are grateful for the love, support and courage of every employee, who helped Dermclinic reach our 50th milestone.”

Keeping a balance between work and home has never posed a problem for Pineda. “This happens when you know what to prioritize and what’s important,” she says. “I also make sure that when I am exhausted, I take breaks for rest and recreation.” Leisure moments come in the form of reading, watching TV series and playing with her canine pets. She adds: “Our family often eats together and that’s when we catch up. We make it a point to separate work from our personal lives. We don’t bring meetings back home with us.”

Her admiration for her father remains boundless. She says: “He always taught me life lessons, which I continue to appreciate until today. He may not have been perfect, but he is someone, who has done everything with a genuine desire to help others.”