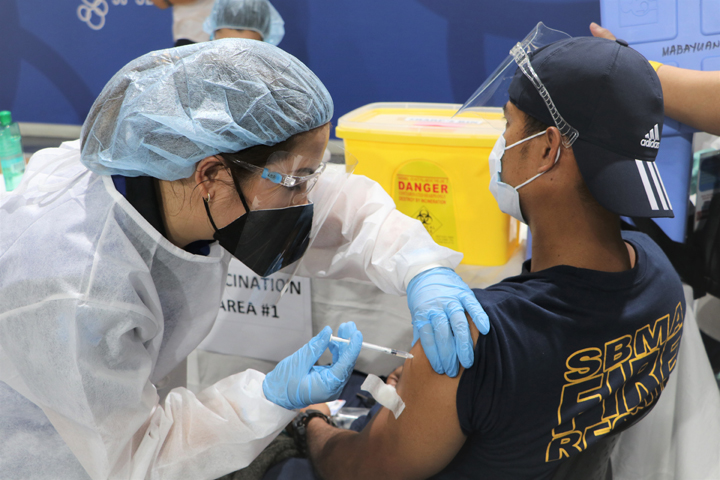 Subic Bay Freeport—After an intensified vaccine rollout in the last three months, about 70 percent of employees of the Subic Bay Metropolitan Authority (SBMA) are now fully vaccinated against Covid-19.

SBMA Chairman and Administrator Wilma T. Eisma said on Thursday that 1,561 employees, or nearly 70 percent of the agency’s workforce totaling 2,238, have completed a vaccination regimen.

Eisma also said a total of 513 employees, or nearly 23 percent, have already had their first vaccine shots, thus leaving only 164 personnel yet unvaccinated.

The SBMA chief, however, said more agency workers will be fully vaccinated in the next two months as more vaccine allocations come in from the Department of Health (DOH) and private sources.

“Right now, we’re looking forward to a full-vaccination rate of more than 90 percent—which is the new target for herd immunity—for our employees by December,” Eisma said.

“We’re doing everything that we can to get all our employees inoculated because, like the rest of the workforce in the Subic Bay Freeport, we need to get back to our normal work schedules to get the local economy going again,” she added.

SBMA figures indicate that 11 of the 47 departments and offices in the agency already have 100 percent vaccination rate as of October 12.

These include Eisma’s office which has a staff of 16, and the Board Secretariat and Office of the Directors, Office of the Deputy Administrator (ODA) for Health and Safety, Public Health and Safety Department, Office of the Senior Deputy Administrator for Support Services, ODA for Administration, ODA for Finance, Management Information Systems Office, Legal Department, ODA for Port Operations, and the Trade Facilitation and Compliance Department. Meanwhile, 12 other offices have a full-vaccination rate of 80 to 96 percent, while eight more  recorded vaccination rates of 70 to 79 percent.

Some health experts had earlier increased the vaccination rate to achieve the so-called “herd immunity” from the initial 70 percent to 90 percent because new Covid-19 variants have reportedly lowered the efficacy of available vaccines.

The SBMA last month expanded the coverage of its vaccination drive to include more workers in locator-companies in the Subic Bay Freeport to sustain productivity in this special economic and free port zone.

Eisma said that under the SBMA-DOH vaccination program, the SBMA Public Health and Safety Department continues to vaccinate qualified recipients in the A1 to A4 categories of the government’s priority list. Henry Empeño