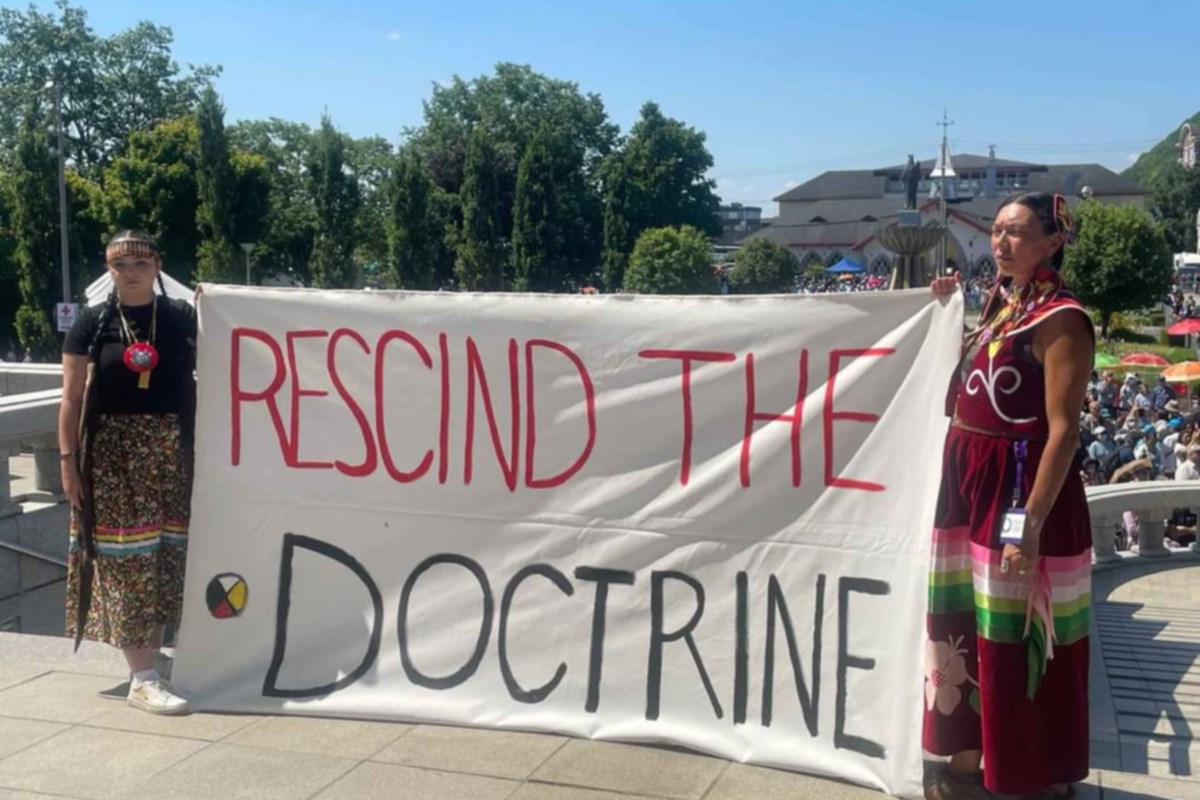 Two members of Batchewana First Nation garnered a lot of attention in mainstream media and social media after they unfurled a large banner with the words “Rescind the Doctrine” emblazoned in red and black paint during Pope Francis’ stop in Quebec City during his visit to Canada to apologize to residential school survivors.

The 15th-century Doctrine of Discovery was connected to thinking that lands being colonized were empty, when in fact Indigenous people called them home.

Sarain Fox, a self-described activist at heart, says that she and cousin Chelsea Brunelle decided to repurpose a large projector screen in order to stage a demonstration outside the mass presided over by Pope Francis at the National Shrine of Sainte-Anne-de-Beaupré July 28.

Fox says the protest was informed by talks with residential school survivors and family members the night before.

“The survivors didn’t feel like they were at the heart of the event. It felt like a spectacle,” she said.

Fox met up with family members — including her uncle, councillor and former Batchewana First Nation chief Harvey Bell — in Quebec City after making plans to meet up in the weeks leading up to the Pope’s appearance.

She says survivors had weeks to plan, yet the federal funding earmarked to assist survivors wanting to attend the papal visit only trickled down to survivors about a week prior to the Pope’s stop in Quebec.

“People were really left scrambling. I think we would’ve seen a lot more survivors had they been given the opportunity to know there was funding, but also to have the time to plan,” said Fox. “I mean, these our elders — they need to have their medications, they need to know if there’s going to be accessibility. It takes a lot of planning to get them on the ground.”

Fox originally wanted to take her aunt, Mary Bell of Batchewana First Nation, to Quebec City. Her aunt Mary spent nearly a decade in the Spanish Indian Residential Schools which operated between 1913 and 1965 in Spanish, Ont.

“In the beginning she said it was too much for her physically, but it’s a big deal — it brings up a lot of old emotions and hurts and pains. I think it was just too much. She didn’t feel the need to go on the ground,” said Fox. “She asked us to go on her behalf, so that’s what we did.”

The idea of demonstrating didn’t cross their minds at first, but Fox says that she and Brunelle unfurling the banner was simply a response to survivors not being the focal point of the Pope’s visit.

“She actually painted that banner — so proud of her and so proud of her courage,” Fox said of Brunelle’s part in the protest. “It takes an incredible amount of courage to do that.

The action taken by the Anishinaabe cousins with ties to Batchewana was one that was seen around the world. Fox says a media outlet from Scotland even reached out to her about it.

“It really reached the world, all corners — so it’s really amazing,” Fox said.

– with files from The Canadian Press