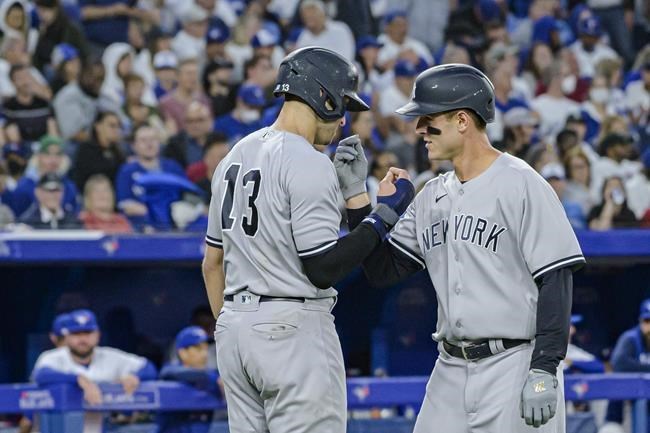 TORONTO — The Toronto Blue Jays are not playing like Ross Stripling thinks they can.

Stripling allowed two runs in a brief 3 2/3-inning start as the Blue Jays were walloped 12-3 by the visiting New York Yankees on Friday. Stripling had exited the game before Anthony Rizzo hit a grand slam as part of an eight-run fifth inning where the Yankees victimized Toronto’s bullpen.

“We know what they like to do and we know we can compete with them,” said Stripling. “We know we’re better than what we showed tonight.”

Alejandro Kirk’s homer in the sixth inning was the offensive highlight for the Blue Jays (37-27). Rookie catcher Gabriel Moreno went 3-for-4 and batted in two runs.

It’s the second straight game that Toronto has given up 10 runs or more, following a 10-2 loss to the lowly Baltimore Orioles on Thursday. Despite the back-to-back losses, the Blue Jays have dropped only seven of their past 22 games.

“Not going to sit here and toot their horn by any means,” said Stripling. “They almost have 50 wins here in the middle of June so they’re certainly clicking on all cylinders.

“I think they have one of the lowest ERAs in baseball and a lineup that can do damage from the first pitch, one through nine, basically. That was on full display for them tonight.”

Giancarlo Stanton, with a two-run shot, and DJ LeMahieu hit back-to-back home runs in the fifth inning for the Yankees before Rizzo’s grand slam. Joey Gallo smashed a two-run shot in the ninth.

“That’s what our offence can do,” said New York starting pitcher Jordan Montgomery. “It’s almost like we’re losing every day, we’re coming out here so hungry.

“We’re just having the memory of a goldfish.”

Montgomery (3-1) struck out five and gave up two runs on three hits and a walk over six innings. Manny Bañuelos, Miguel Castro and Lucas Luetge came out of the Yankees’ bullpen, with Bañuelos allowing a run.

“If you play a team that’s that hot, you’ve got to execute and you’ve got to come back and we didn’t do that,” said Toronto manager Charlie Montoyo.

Moreno brought most of the 44,688 at Rogers Centre to their feet with an RBI single in the second. His base hit up the middle scored Kirk for a 1-0 Toronto lead.

Torres replied for the Yankees in the top of the fourth, banging a double off the left-field wall and driving in LeMahieu who led off the inning with a single.

The Yankees put the game out of reach in the fifth.

Stanton put the ball just inside the foul screen in right field, bringing home Rizzo for a 4-1 lead. On the very next pitch, LeMahieu hit a solo shot to left to tack on another run.

Torres and Gallo followed that up with back-to-back doubles, with the latter driving Torres home for a 6-1 lead before Toronto could even record an out.

With the bases loaded, Rizzo came up for the second time in the fifth. He launched an 0-1 pitch from Richards off the facing of the third deck to score Gallo, Isiah Kiner-Falefa and Aaron Judge.

Kirk had his sixth home run of the season in the sixth inning, sending the ball 342 feet into Toronto’s bullpen to make it 10-2.

In the seventh, Moreno beat the throw from Kiner-Falefa at short for a hit, scoring Matt Chapman from third base.

BO NO — Bo Bichette was left out of the Blue Jays’ starting lineup on Friday after suffering a foot contusion in Thursday’s loss to Baltimore. He was considered day to day.

OTTO-MATIC — Infield prospect Otto Lopez was recalled by Toronto from Triple-A Buffalo. Left-handed pitcher Matt Gage was optioned to the Bisons in a corresponding move.

UP NEXT — Alek Manoah (8-1) gets the start as the Blue Jays continue their series against the Yankees. Canadian righty Jameson Taillon (7-1) will take the mound for New York in the matinee.

This report by The Canadian Press was first published June 17, 2022.