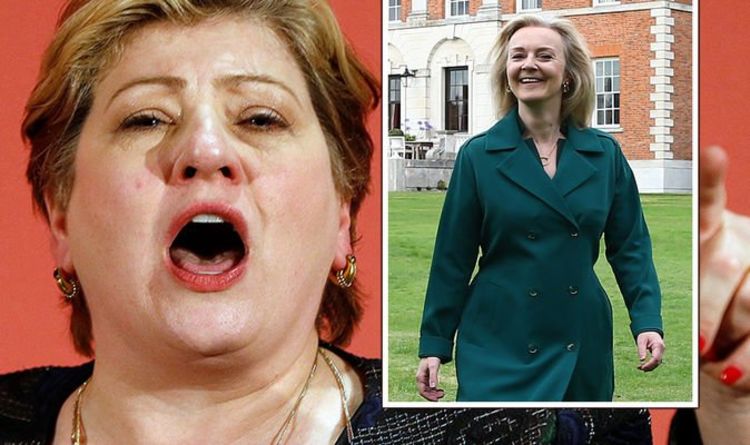 Ms Truss, who was International Trade Secretary until last month, quickly became a favourite among Conservative members after securing scores of trade agreements in under two years.

In total 68 trade agreements, not including the EU trade deal, have been signed with countries around the world.

But following a new report which warns of deals being rushed through, Ms Thornberry criticised the now-Foreign Secretary’s approach for trade.

She said: “The Tory government has thrown away a historic opportunity to reshape our trade policy to support British exports, jobs and growth, all in the hope of a few quick photo opportunities and signing ceremonies.

“And now in their desperate pursuit of that misguided policy, they are preparing to sell out our farming communities to Australia with nothing to show in return, the sorriest chapter yet in a five-year saga of failure.”

While the Labour MP did not mention Ms Truss by name, she is the only one to have signed off on the UK’s new post-Brexit trade agreements.

Her successor, Anne-Marie Trevelyan, has been in the job for just four weeks.

The shadow trade secretary’s comments come after the Resolution Foundation and the Centre for Economic Performance at the London School of Economics said the UK needed to form a clearer economic strategy for its trade policy.

A joint report by the institutions warned there would be “seismic shifts” to the UK economy over the coming decade and Britain currently appeared underprepared.

They said there was currently too much focus being placed on individual trade deals and not enough on the broader picture.

Sophie Hale, principal economist at the Resolution Foundation, said: “For the first time in 50 years, the UK has a proper, independent trade policy, but our trade debate has focused almost entirely on the nuts and bolts of individual trade deals, completely missing the big picture that a successful trade policy requires an economic strategy.”

Swati Dhingra, associate professor at the Centre for Economic Performance, added: “Trade agreements, focusing on piecemeal market access, are not going to deliver the economic objectives of inclusive sustainable growth.

“The Brexit debate has increased awareness and understanding of economic integration.

“Now that knowledge needs to be harnessed to redefine the UK’s place in the world trading system, at a time when the pandemic and global tensions have caused widespread economic disruptions.”