Israel has told the United States it cannot definitively determine who fired the shot that killed Al Jazeera reporter Shireen Abu Akleh in Jenin without examining the bullet removed from her neck, according to a Friday Israeli television report.

Abu Akleh, 51, was killed by gunfire Wednesday morning while covering clashes between Israeli troops and Palestinian gunmen during an Israeli military operation in the West Bank city of Jenin.

Channel 12 news said the US asked Israel for clarifications on the ongoing probe into the death of Abu Akleh, who had American citizenship. Israel reportedly responded by asking the US for assistance in the case, including in obtaining the bullet from the Palestinian Authority for analysis.

The Israel Defense forces said earlier Friday that the Palestinians had rejected offers to be present and take part in the inquiry alongside an American representative.

An interim report issued by the IDF earlier on Friday set out two likely scenarios regarding who fired the fatal shot — an instance of Palestinian terrorists’ gunfire and of Israeli sniper fire — in neither of which Abu Akleh was deliberately targeted.

In the case of Israeli sniper fire, the army said the probe involved a soldier who used a gun with a telescopic sight to fire back at a gunman through a slit in the armored vehicle he was riding in.

“The gunman fired bursts toward the IDF soldier several times and there is a possibility that the reporter was struck by the soldier’s fire toward [him],” a statement from the IDF said. 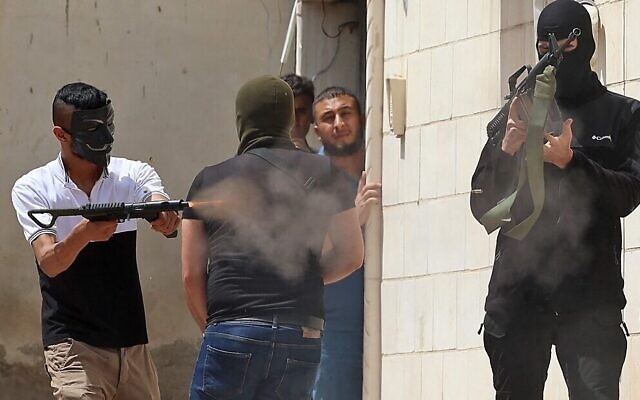 A masked Palestinian gunman fires an automatic weapon during clashes with Israeli security forces in the West Bank city of Jenin on May 13, 2022. (Jaafar Ashtiyeh/AFP)

According to Channel 12, IDF chief Aviv Kohavi held a closed meeting with several generals on Thursday — before the interim probe report was published — at which the possibility that Abu Akleh was hit by an Israeli bullet was discussed.

Two sources familiar with the discussion say this possibility was defined as “very likely,” the network reported.

The report said some of the meeting’s participants considered it no less likely and possibly more likely that she was hit by an errant IDF bullet than by indiscriminate Palestinian fire.

Kohavi reportedly said these were premature and speculative assessments — and ordered more expert input and a reconstruction of the events. During an operation in the Jenin area on Friday morning, troops also headed to the scene where Abu Akleh was killed, to attempt to reconstruct the events. 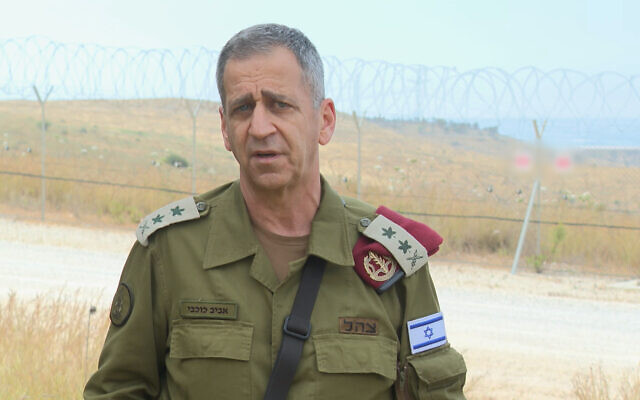 IDF Chief of Staff Aviv Kohavi speaks from a military base in the West Bank, on May 11, 2022. (Israel Defense Forces)

The IDF chief also said in the Thursday meeting that we “certainly think it is possible” that she was hit by IDF fire, but added that examining the bullet pulled from Abu Akleh’s neck would provide definitive answers, the TV report said.

An IDF spokesman told Channel 12 in response that it cannot currently definitively determine the circumstances of the reporter’s death, and that the military will continue to investigate and is committed to finding the truth.

Palestinian prosecutors said Friday that, according to their initial investigation, only IDF troops could have fired the bullet that killed Abu Akleh.

Palestinian investigators had found fresh evidence and markings on a tree at the scene of her death, and had determined that IDF troops were 150 meters away at the time of the incident.

The bullet was transferred to a criminal forensic laboratory, which will issue a detailed report on the matter, reports said.

The UN Security Council on Friday called for “an immediate, thorough, transparent, and fair and impartial investigation” into the killing.

The release of the interim findings came as Abu Akleh’s funeral was held in Jerusalem. Israeli police rushed mourners and hit them with batons during the funeral, sparking global outrage. Police said officers intervened after “rioters” seized the coffin from Abu Akleh’s family, and that marchers had hurled glass bottles and other objects at police.

However, in an interview with the BBC on Friday, Abu Akleh’s brother Tony appeared to deny the Israel Police version of events, saying that the family and mourners hoped to hold a “small procession” but were “bombarded” by officers as they left the hospital. He did not clarify if the planned procession was on foot or by car.

“It is really very sad to see this happening at a funeral. We were hoping to have a small procession from the hospital to the church and then to the cemetery,” he said. “But unfortunately the minute we started walking out of the hospital we were bombarded by several Israeli police, and just for nothing. We were just leaving the hospital for the church. We were shocked to see them just starting beating people, throwing stun grenades, tear gas. All this — we cannot explain it. This happened without any explanation.”

The slain journalist’s brother also said that ahead of the funeral, Israeli authorities had asked them to provide the exact number of mourners expected, as well as their identities.

“They wanted to know the exact numbers, but we couldn’t provide [them]. They wanted to know who will participate, how many people we expected to participate,” he said. “They were clearly informed that we are not in a position to know the numbers. This funeral was for all the Palestinian people, not only for Shireen’s family or friends. They are paying respects for what she did for Palestine, for her reports over a period of 25 years.” 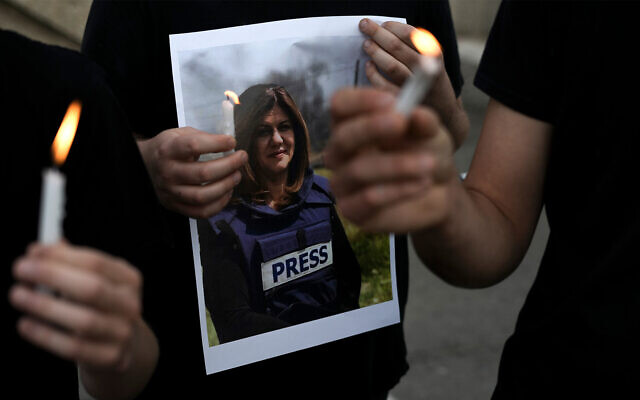 Protesters hold candles and a photo of Al Jazeera journalist Shireen Abu Akleh, who was killed while covering clashes between IDF troops and Palestinian gunmen during an IDF raid in Jenin, in Haifa, Israel, May 11, 2022. (AP Photo/Ariel Schalit)

The death of Abu Akleh, who covered the Mideast conflict for more than 25 years, sparked international condemnation.

The Qatari-owned Al Jazeera accused Israel of deliberately killing her and vowed to take legal action. Reporters who were with her said there were no Palestinian gunmen in the area.

Abu Akleh’s death came during a raid on Jenin, which has become the locus of Israel’s attempts to crack down on terror emanating from the West Bank.

Nineteen people have been killed in Palestinian attacks in recent weeks, with several of the terrorists coming from Jenin and the surrounding area. IDF activity has killed more than 30 Palestinians, most but not all of them involved in attacks or clashes with Israeli forces.