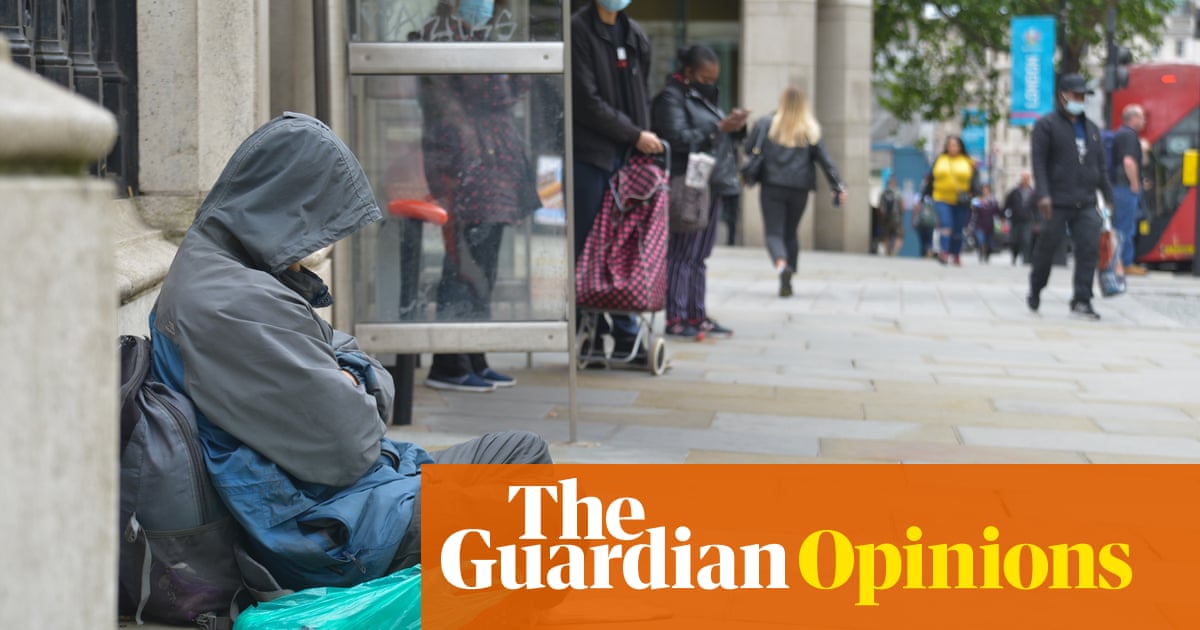 After taking a drag on a cigarette thought to be laced with spice, Gyula Remes collapsed in the freezing underpass at Westminster tube station, three years ago last week, just across the road from the Houses of Parliament. The Hungarian national’s lips went blue, and he stopped breathing. He had come here for a better life but was soon being rushed a few hundred yards across Westminster Bridge to St Thomas’ hospital, where he died, aged 43.

Remes was one of 726 people estimated to have died homeless in England and Wales in 2018, and his death could so easily have been prevented. A week before he died, Remes had applied to the Connection at St Martin-in-the-Fields, a highly regarded homeless night shelter that benefits from the Radio 4 Christmas appeal every year. The Connection said it was unable to let Remes access its night shelter because, in its words, he did not have a “realistic and sustainable route off the streets”. Kafka would have been hard pressed to come up with a more dystopian scenario. Ironically, it emerged later that Remes was doing part-time kitchen work and had just been offered full-time work.

His death (the second in 10 months in the same underpass) sparked outrage in parliament. The next day, the then secretary of state for housing, communities and local government James Brokenshire, who died in October this year, told parliament: “Every death of someone sleeping rough on our streets is one too many. Each is a tragedy, each a life cut short. We have a moral duty to act.”

However well-intentioned Brokenshire’s words, the government reneged on this duty. In 2019, the number of deaths among homeless people in England and Wales rose for the fifth year in a row to a record high of 778. Meanwhile, the number of people who were entirely homeless or living in temporary accommodation and hostels in England soared to 280,000 in 2019 from a low of 40,000 in 2009 and 2010.

While the government failed to tackle homelessness, many members of the public continued to do the same thing they had always done to address the issue – donate to charity. Over the Christmas appeals of 2017 and 2018, Radio 4 listeners raised more than £5m to support the Connection at St Martin-in-the-Fields. Then the pandemic came along and proved what many of us have always known: by and large, eradicating street homelessness can be done (though some people will inevitably return to the streets), and it’s the responsibility of government, rather than charities, to do this. Under the policy introduced at the beginning of the first lockdown called Everyone In, the government found £105m to get England’s homeless people off the streets and into emergency accommodation to keep them safe from Covid-19.

The idea behind Everyone In was to provide rough sleepers with accommodation; hopefully support, tailored to individual needs, would follow. But there is already a name for a policy that combines immediate housing with the crucial “wrap-around support” that should follow it: Housing First. In Britain, Housing First is still regarded as a radical model to end homelessness, but it shouldn’t be. It’s common sense. You house people, then address their complex needs, rather than tell them that if they manage to address behaviours such as addiction, they will qualify for housing.

Housing First was developed in New York in the early 1990s, and has virtually ended rough sleeping in some states – Utah, for example, has reduced chronic homelessness by 91%. Meanwhile, in Finland Housing First has been an unqualified success since being introduced in 2007. Rough sleeping has been all but eradicated in the capital, Helsinki, where there remains only one night shelter, of 50 beds.

In Britain we cannot measure the effectiveness of Housing First because we have been neither brave nor humane enough to trial it on a national level. But we can look at how successful our impromptu version of it was, and the fact is, we managed to get most of Britain’s rough sleepers housed within days. According to one study, the scheme saved an estimated 266 people from death in the first lockdown. Boris Johnson had won a huge majority only three months earlier and was terrified of his popular support being eroded by the prospect of homeless people dying on the streets in large numbers.

But the concern over street homelessness did not last long. By June 2020 only 16 of the 46,687 deaths registered as Covid-related in England and Wales were identified as people who were homeless. The government reverted to type, and the homelessness crisis once again became a low priority. In February 2021, according to Shelter, 77% of the 37,430 people helped under the Everyone In banner were not living in settled accommodation (somewhere they could stay for at least six months); and almost one in four were no longer being accommodated at all. As for wraparound support (the second, vital, part of Housing First), the project did not last long enough and was insufficiently resourced (understandable in those chaotic days).

This was a real opportunity to transform homelessness and British society. Johnson had a chance to steal a huge head start on his promise to eradicate street homelessness by May 2024, and he blew it. But as he’s shown throughout his career, he’s never given a tuppenny toss for his own pledges. Promises are simply there to be broken. As London mayor in 2009, he promised to “end rough sleeping in the capital by 2012”. By the time he left office, the number of homeless people on the street had more than doubled, from 3,673 to 7,500.

As early as January 2021, Citizens Advice was already reporting that half a million people had gone into rent arrears during the pandemic, while a study by the debt charity StepChange in September showed that 225,000 people feared losing their homes. The ending of the £20 uplift in universal credit, and rocketing energy prices, make it even more likely that people will be turfed out of their homes. In summer, the Big Issue launched a Stop Mass Homelessness campaign, and last month it estimated that if the government pays off the £360m rent arrears accrued over the pandemic it could save £2.6bn in the long term by preventing homelessness.

Last Tuesday the government announced that Everyone In would be reintroduced for rough sleepers this winter, as well as funding of £310m for councils to prevent vulnerable people from becoming homeless. At first glance, it looks great. But the reality is, it’s little more than a repeat of emergency pandemic measures. The risk is that it becomes another temporary fix, which falls off the priority list as soon as winter passes.

Everyone In has already proved how simple it is to tackle rough sleeping. Now the government needs to go further. The countrywide introduction of Housing First (funded by central government) is in the interests of homeless people, the economy, society at large and Johnson himself. All Johnson has to do is put his money where his mouth is to show that he is capable of keeping a promise, and he will create a legacy worthy of Remes and the thousands who have died needlessly on our streets, as well as for Brokenshire – and, dare we say it, even for himself.