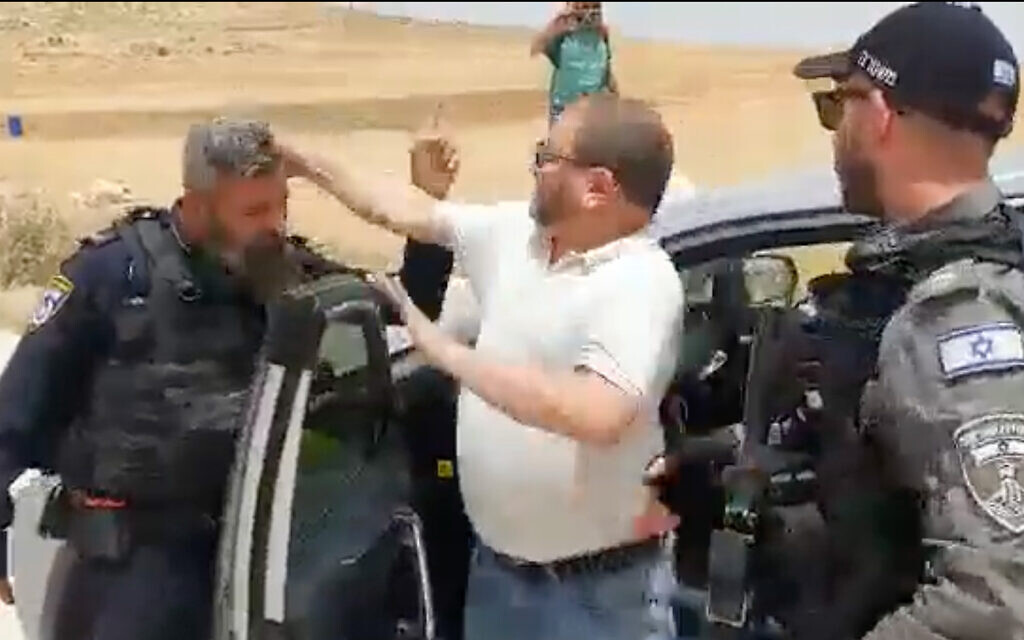 A Knesset member from the Arab-majority Joint List party hit a police officer on Friday after security forces blocked his vehicle from reaching a protest in the West Bank.

Joint List MK Ofer Cassif hit the officer lightly on the head during a heated verbal exchange after police and Border Police stopped his car in the South Hebron hills.

In a video, a police officer attempts to halt Cassif’s vehicle. The car bumps into the officer, who approaches Cassif and shouts at him to move his vehicle away.

“Move your car. You’re not getting in,” the officer shouts.

“I didn’t touch you,” Cassif yells back.

Cassif then strikes the officer, and accuses him of an attack.

“You hit me in the face,” Cassif shouts.

“Who even are you? Get out of here,” he says in the footage.

Police said they launched an inquiry into the matter to assess if a criminal investigation could be opened.

Knesset members have parliamentary immunity, which allows them to travel almost everywhere in the country. It was not clear why Cassif was barred entry from the area, or if the police officers knew who he was.

Cassif was attempting to reach a protest at Masafer Yatta — or Firing Zone 918 — an agriculture area near Hebron in the West Bank. Israel’s top court recently ruled to evict over 1,000 Palestinians from the land in a controversial case and one of Israel’s longest-running legal battles.

Cassif is the only current Jewish lawmaker in the Arab-majority Joint List party and is known for his outspoken politics and getting into heated arguments with other Jewish Knesset members.

Last year, police beat Cassif during a protest in East Jerusalem, drawing condemnation from lawmakers across the political spectrum.

Israeli police were under fire on Friday after officers beat mourners in a disputed incident at the funeral of Al Jazeera journalist Shireen Abu Akleh in Jerusalem. Footage of police hitting marchers in the funeral procession has sparked global condemnation.