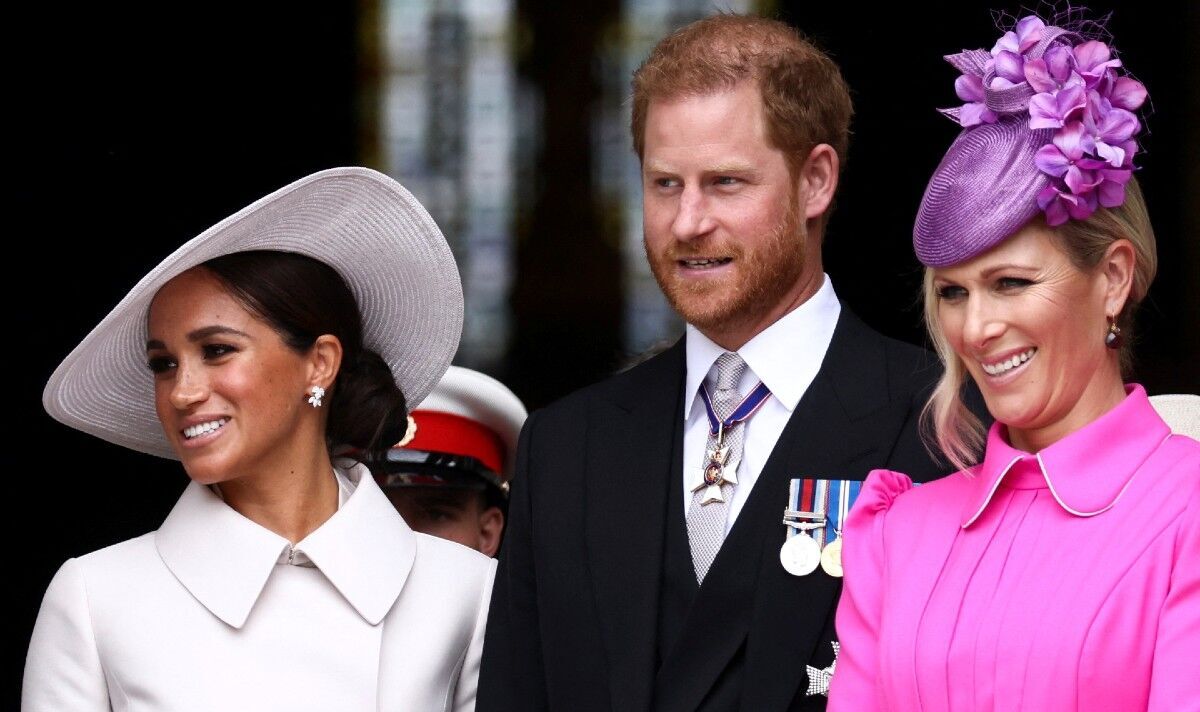 The Duke and Duchess of Sussex were chatting to Princess Anne’s daughter after attending the National Service of Thanksgiving for the Queen at St Paul’s Cathedral in London on Friday, June 3. Harry, Meghan, Zara, her brother Peter and husband Mike were on the steps of the cathedral while waiting for cars to whisk them away from the venue.

Zara, who had given birth to her son Lucas when they last met, replied: “No I haven’t, how do you know?”

Harry kept a low profile at the service. He arrived holding hands with his wife ahead of the Prince of Wales and Duke of Cambridge.

She said: “It was like he had agreed to be the invisible man there to some extent.”

Ms James said Harry’s mannerisms at the service included keeping his head down – which can be seen as a “gesture of submission” – while he also appeared to touch his clothes frequently, which she said can be a sign of anxiety.

“He seemed grateful to be able to smile and seemed less anxious at that point. Up to that point his anxiety levels seemed quite high.”

The Sussexes spent the Platinum Jubilee in the UK, but only made that one public appearance alongside the Windsors.

It was the first time the couple had been on full public view with the Windsors since Megxit two years ago.

Harry and Meghan’s visit also coincided with the first birthday of their daughter Lilibet.

A new photo released on Monday by the couple showed Lilibet celebrating her first birthday at a picnic over the weekend.

Dressed in a light blue frock with a white bow on her head, the red-haired toddler sat on the grass in a candid snapshot taken by close family friend Misan Harriman on Saturday.

A highlight of the intimate gathering at Frogmore Cottage in Windsor was a cake by American baker Claire Ptak, who created the wedding cake for the Duke and Duchess of Sussex in 2018.

Lilibet Diana Mountbatten-Windsor was born in California and was named in honor of Queen Elizabeth II, whose family nickname has been Lilibet since she was a child.

Known as Lili, Lilibet’s middle name was chosen in memory of her late grandmother.

Neither Lilibet, nor her older brother Archie, 3, were seen in public at any of the Jubilee celebrations.