IF elected president, Sen. Panfilo “Ping” Lacson will consider putting an end to lockdowns, which he said were ineffective in slowing down Covid-19 transmission.

Lacson, who is seeking the presidency in next year’s elections with Senate President Vicente Sotto 3rd as his running mate, also deplored the government’s apparent preference for a particular brand of vaccine against Covid-19, which he said has “efficacy problems.” 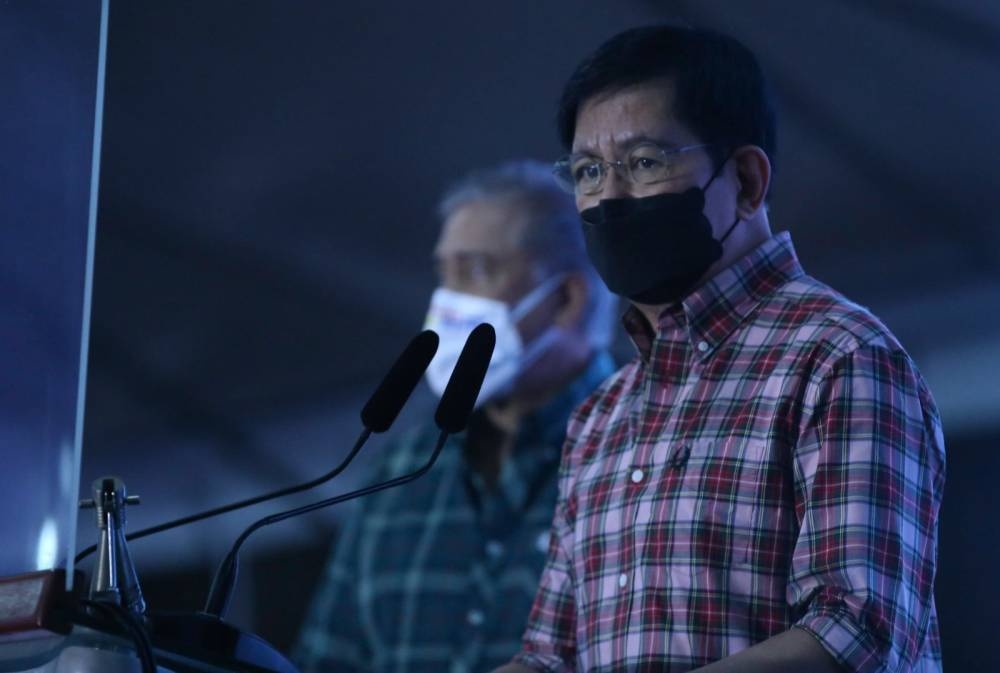 In this file photo Senator Panfilo Lacson and Vicente Sotto 3rd make their way to the Harbor Garden Tent of the Sofitel Manila in Pasay City to file their respective certificates of candidacy for president and vice president on October 6, 2021. PHOTO BY ENRIQUE AGCAOILI

During a media forum on Thursday, he said that despite implementing the world’s longest lockdown, the country has not prevented the spread of Covid-19, much less helped it recover economically.

“We’re toying with the idea that after June 30, 2022, wala na tayong (we won’t have anymore) lockdown kasi hindi nagwo-work ang (because the) longest lockdown (does not work),” he said.

He said there could be a better approach in controlling the pandemic.

In another interview, Lacson said that all anti-Covid-19-related policy decisions must be science-and-technology-based and data-driven, and not reached through trial and error.

“As we go on, we adopt methods that work and reconsider those that don’t. If we cannot be flexible or adapt, nothing good will happen to us,” he stressed.

He said they are considering alternatives such as a more efficient rollout of vaccines, capacitating government hospitals, and the judicious use of public funds — including an off-budget “income” for government hospitals to defray the hospitalization expenses of patients.

The senator said he also pointed this out to Health Secretary Francisco Duque 3rd during the hearing of the Department of Health’s 2022 budget on Wednesday.

“Covid is here to stay; we don’t know when it will end. I told Secretary Duque that what we have is not working. Tayo ang longest lockdown sa buong mundo (We have the world’s longest lockdown),” Lacson said.

Making matters worse are other factors such as corruption in procuring supplies to address the pandemic, along with inefficiency and incompetence, he added.

“Pinaparusahan natin ang ekonomiya at hindi nagwo-work ang health efforts natin para ma-cure ang Covid (We are punishing the economy with health efforts to cure Covid that do not work),” he said.

Lacson added that he and Sotto will be fair in dealing with corruption in government.

“Of course, we will pick up the good programs and disregard or stop those which are not good for the general public,” he said in Filipino.

“We cannot really defeat corruption kung (if there is) double standard,” Lacson said during the Pandesal media forum.

He noted that Duterte’s main campaign platform in 2016 was to fight corruption. “But then we see that there’s a double standard.”

“‘Pag kakampi hindi masyado na-pupursue or kinakampihan pa (If [he or she is] an ally [the case is] not fully pursued and [they were] even defended,” Lacson pointed out.

“Under the Lacson-Sotto leadership, walang sinisino (no one will be spared).”

He said the anti-corruption campaign will not succeed if it will only focus on the lower level of government but will hesitate to run after those corrupt in the “highest ladder ng bureaucracy.”

Lacson said Sotto will continue President Rodrigo Duterte’s war on drugs but with “major modification” to also focus on rehabilitation.

“Under his management style ‘yung (the) law enforcement will only be one component,” he said.

Prevention and rehabilitation will be given priority because this aspect has been neglected under the Duterte administration.

Sotto, Lacson said, has the expertise and the experience and the track record in dealing with the illegal drugs “because he was the author of the Dangerous Drugs Act.”