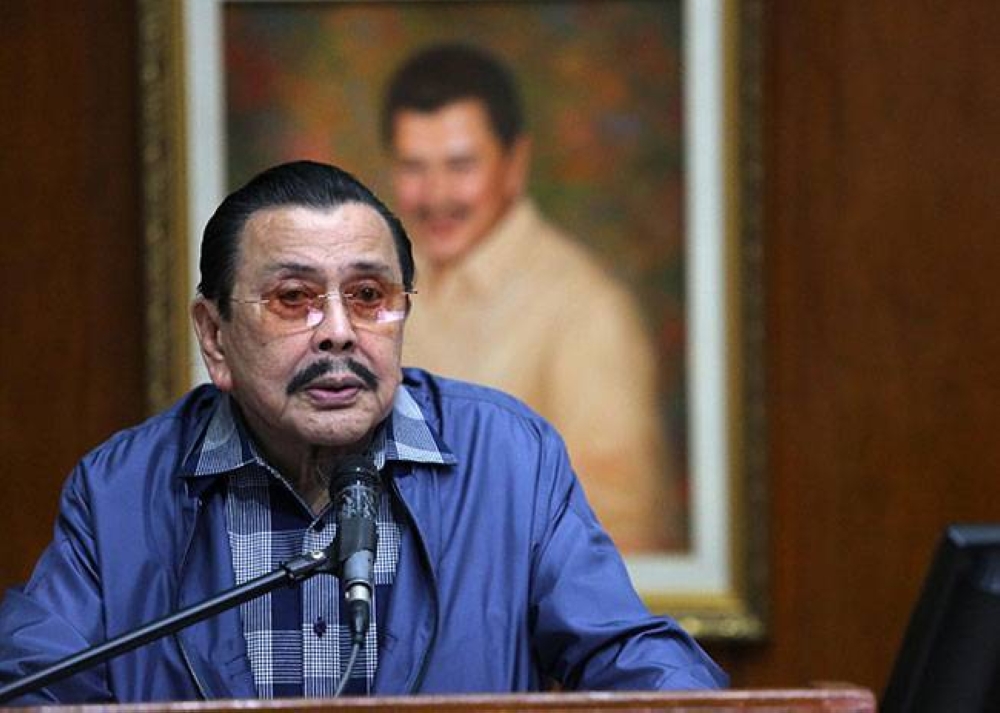 Upon the invitation of the family, I sat with the former president for lunch at his North Greenhills residence on Sunday. I arrived at 12:15 p.m., and after clearing the medical safety protocol, proceeded to the dining table where President Erap was seated alone. I was informed that all guests are given antigen tests and have to pass through a fog sanitizer before meeting with the former president.

Food was aplenty, and there was his favorite lechon de leche. As usual, the food was excellent. Erap, as he is fondly called by friends, was his usual self: ebullient, witty and carefree. For someone who almost lost his life to Covid-19 just a few weeks ago, he didn’t show any trace of his near-death experience — he was intubated and spent a week or two in the intensive care unit (ICU). He was vibrant, lively, full of laughter. If I didn’t know any better, I would have thought that he had not been hospitalized and spent several weeks in ICU.

We did not talk politics. I was glad we didn’t. With so much politics coming out of my ears, it was a moment to enjoy, to engage in small “gossipy” talk for a change with a former president on matters that made him Erap, who for a long while was the “masa’s” most beloved leader. Besides, I did not think it was appropriate to talk politics, and I could sense that he, too did not want to talk about it, either.

Like the Erap that I know, he would press me repeatedly to take the mechado along with a specially prepared sauce, the recipe of which he proudly said was handed down to him by his late mother who was a Home Economics graduate from the University of the Philippines (UP). True enough, the mechado was very good, especially when paired with the sauce Erap so proudly endorsed.

Like his parents, Erap believes in education. Unlike material wealth which can go pfft, he said education or knowledge is constant. I ribbed him that he is the only one among the 10 Ejercito children who has no college degree. “I’ve taken up engineering in Polytechnic University of the Philippines (PUP),” he protested.

I pressed ahead and said, “But you did not take the board.”

“I was kicked out of Ateneo for being ‘pasaway’ (bullheaded),” he recounted with a giggle.

He would explode with a big laugh when talking about his late father and his 10 children. “Bahay, office lang Papa ko, kaya siguro sampu kami (My Papa’s daily routine was office, work, and that’s probably why there were 10 of us),” he said.

To those who know Erap, he is “one of the boys,” easy to get along with, charming, full of wit, and generous and kind in describing his detractors. There was nothing negative he uttered about those who took advantage of him. “If God can forgive, why can’t I? Who am I?” he quipped.

He reminisced about the good old days; his parents, his siblings and mostly his stint as a movie star. He talked fondly of his departed friend, Fernando Poe Jr. (FPJ), and how the two of them dominated the movie world for decades. He was mighty proud of his achievements as an actor. He started as a bit player in a movie directed by his girlfriend, a leading role, and soon after, together with his buddy FPJ, became a towering figure in Philippine movies for decades to come.

“Hindi umobra sa amin ni FPJ ang Big 4.” (The Big 4 refers to the Asistio brothers, reportedly a “notorious” gang during the ’60s who used to prey on hapless movie stars.) It was the FPJ-Erap tandem who crushed the “Big 4” and finally brought peace and harmony to the movie industry, which at that time was dominated by the LVN and Sampaguita Pictures.

Unlike other movie stars, Erap invested his talent fees from the movies in real estate, mostly apartments. “Ang dami kong apartment na nabili noong artista pa ako (I bought several apartments when I was still in the movies). As early as then, I was already earning around P2 million a month,” he said. “I was literally swimming in money.”

Erap is obviously enjoying his retirement. He looks healthy and exuberant. He is at peace with himself and with the world. His career path from a bit player in the movies, to superstar, to producer, to San Juan mayor, senator, vice president, president, and to Manila mayor is one for the books.

Especially for one who did not finish college, Erap’s success in the world of entertainment and in Philippine politics is nonpareil.