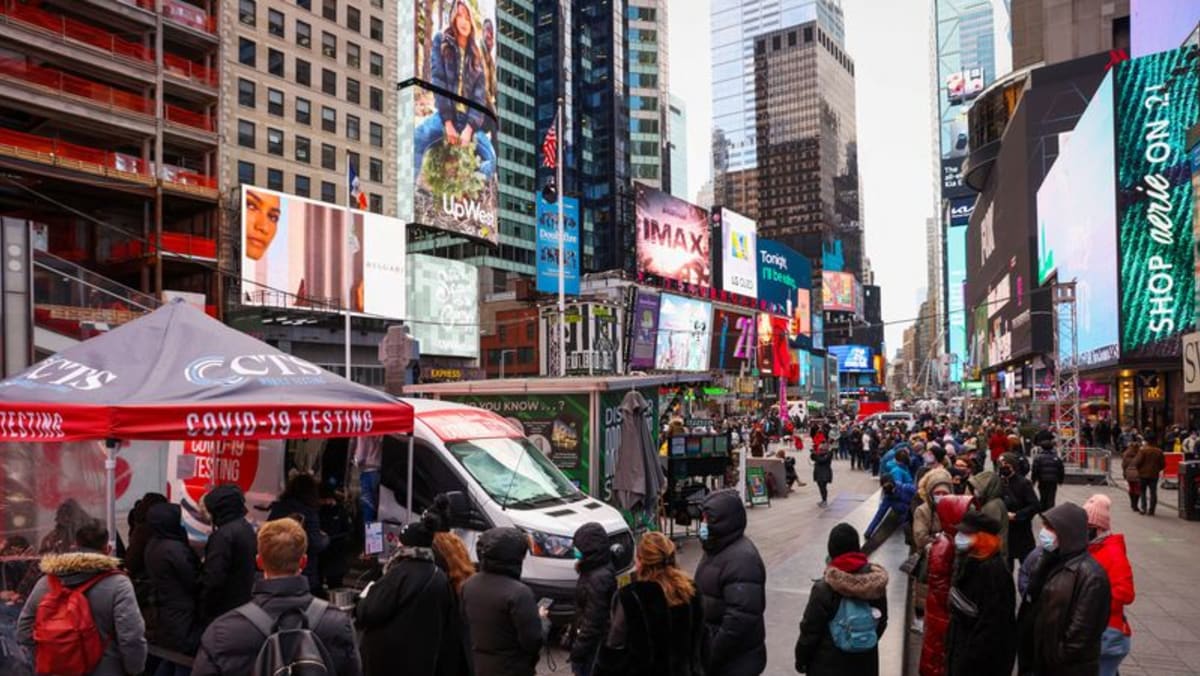 WASHINGTON: US health officials urged Americans on Sunday (Dec 19) to get booster shots, wear masks and be careful if they travel over the winter holidays, as the Omicron variant raged across the world and was set to take over as the dominant strain in the United States.

The government is gearing up for the next phase of battle in a two-year fight against a virus that has killed 800,000 and disrupted every aspect of daily life.

Dr Francis Collins, director of the National Institutes of Health, told CBS’ Face the Nation that the number of Omicron cases will rise steeply in the next two weeks.

“A big message for today is if you’ve had vaccines and a booster, you’re very well protected against Omicron causing you severe disease. So, anybody listening to this who’s in that 60 per cent of Americans who are eligible for a booster but haven’t yet gotten one: This is the week to do it. Do not wait,” he said.

Omicron is multiplying rapidly, making COVID-19 vaccinations and booster shots more crucial than ever, chief White House medical adviser Dr Anthony Fauci said on Sunday. Currently 27 per cent of US residents have not gotten even a single dose of vaccine, according to the Centers for Disease Control and Prevention.

“It is just, you know, raging through the world,” Fauci, director of the National Institute of Allergy and Infectious Diseases, said on NBC’s Meet the Press.

Omicron has been found in 43 out of 50 US states and around 90 countries so far.

US Senator Elizabeth Warren, said on Sunday she had tested positive for COVID-19 but was only experiencing mild symptoms.

The Massachusetts Democrat, 72, said on Twitter she is vaccinated and boosted and regularly tested for COVID-19, and “while I tested negative earlier this week, today I tested positive with a breakthrough case.”

She said she was “grateful for the protection provided against serious illness that comes from being vaccinated and boosted.”

The number of cases is doubling in 1.5 to 3 days in areas with community transmission, the World Health Organization said on Saturday.

In certain regions of the United States, 50 per cent of the COVID-19 tests genetically sequenced detected the Omicron variant, Fauci told CNN, “which means it’s going to take over”.

In New York City, Mayor Bill de Blasio urged residents to get vaccinated or get a booster shot and said the city would spend US$10 million on an advertising campaign to promote boosters.

Colorado Governor Jared Polis, meanwhile, told NBC he was considering changing the definition of fully vaccinated in his state from two shots to three. “I wish they’d stop talking about it as a booster. It really is a three-dose vaccine,” he said.

President Joe Biden plans to give a speech on Tuesday about the rising COVID-19 cases, hammering home his message to unvaccinated Americans to get a shot and for those who are vaccinated to get a booster.

Part of Biden’s strategy is to focus on increased testing, Fauci told CNN’s State of the Union.

“We really need to flood the system with testing. We need to have tests available for anyone who wants them,” he said.

Hospitals in some parts of the country are already becoming strained by COVID-19 patients and things are likely to get worse, the health officials said.

“The government is prepared now to start sending out surge teams as needed to places that are really hit hard and the president’s going to have more to say about that in a speech on Tuesday,” Collins said.

Neither Fauci nor Collins urged vaccinated Americans to cancel travel plans – just to wear a mask at all times in airports, on planes, trains and buses.

“I’m not going to say you shouldn’t travel, but you should do so very carefully,” Collins said.