Right-wing opposition parties collectively left the Knesset plenum in protest on Tuesday evening after a Knesset committee decided to fast-track the approval of a controversial bill that would allow thousands of illegally built homes mostly in Arab communities to be connected to the power grid.

The Electricity Bill, proposed by the coalition’s Islamist Ra’am party in August, aims to address the issue of more than 130,000 Arab Israelis who live in illegally built homes across the country that cannot be connected to the national grid under existing legislation. Arab Israelis have blamed the situation on outdated urban plans that classify open land as “agricultural” rather than residential.

The Knesset agreed to limit the amount of discussion that can be held on the bill to ensure that it will come to a vote on Wednesday morning, employing a little-used clause to push the vote ahead. The opposition had intended to stretch the debate out for 94 hours, but that plan was overridden and the vote is instead now slated for 8 am on Wednesday.

Excluding the Joint List party, which did not participate in the boycott, opposition parties called the bill another form of lawlessness in Arab communities and an attempt to “legitimize the theft of lands owned by the state by allowing the construction of tens of thousands of illegal Arab buildings.”

The bill has become the center of an ongoing conflict between coalition and opposition parties. Following up on threats made earlier in the day, members of the opposition boycotted all proceedings surrounding the bill after the coalition had attempted to fast-track its approval.

“The Knesset has become redundant, without being able to to hold significant discussions and in a way that severely damages Israeli democracy,” a joint statement released by the opposition parties read. 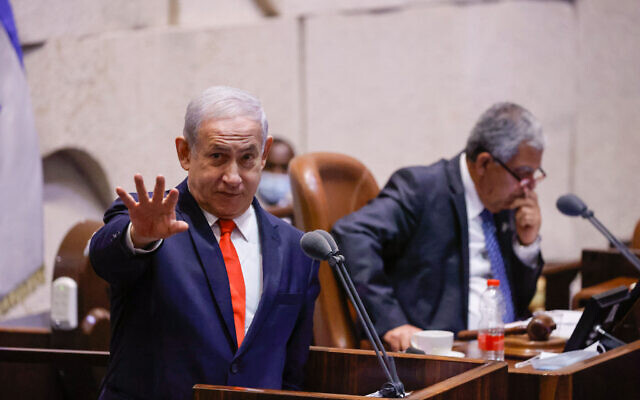 “For the first time in the Knesset’s history, a Knesset committee has gone against the explicit position of the attorney general and has decided to fast-track in an unprecedented manner the Electricity Bill proposed by Ra’am,” the statement added.

Opposition parties claim that the decision to swiftly advance the measure was made in order to “silence criticism put forth by the opposition” by preventing opposition parties from voting on reservations to the bill. They accused the coalition “giving in to a demand made by the Islamic Movement that the bill is approved by tomorrow,” referring to the Ra’am party.

Furthermore, the opposition claimed that the coalition deliberately scheduled a discussion of other proposed bills for Wednesday, further limiting the possibility of debate on the Electricity Bill and violating an agreement they had reached with Knesset Speaker Mickey Levy.

“Therefore, leaders of the opposition have decided that they are not interested in being pawns in the rigged game of crushing our democracy,” the statement read.

On Twitter, Bezalel Smotrich, leader of the far-right Religious Zionism party and one of the bill’s chief opponents, accused the coalition of “destroying democracy and the Knesset.”

The opposition said it will continue to boycott all proceedings until the decision to fast-track the bill’s approval is reversed “and the discussion can be held like it always has been.” 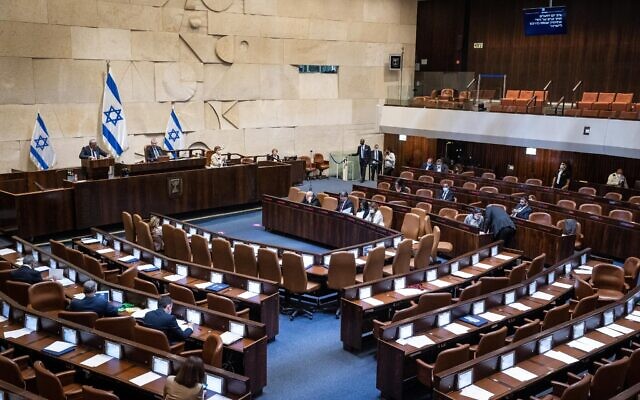 The Knesset plenum during a special session honoring Jerusalem Day, on May 10, 2021. (Yonatan Sindel/Flash90)

Opposition leader Benjamin Netanyahu is expected to convene the opposition parties on Wednesday for an emergency discussion regarding the bill.

Even if the bill passes, it remains unclear how many homes would be connected to the national grid by the legislation. An analysis by the left-wing Sikkuy nonprofit found that only around 1,050 Arab homes fit the criteria under the new law to be connected to electricity.

Some homes will also likely be connected in ultra-Orthodox communities, where illegal construction is also rampant. Committee members from ultra-Orthodox parties have expressed support for the law.