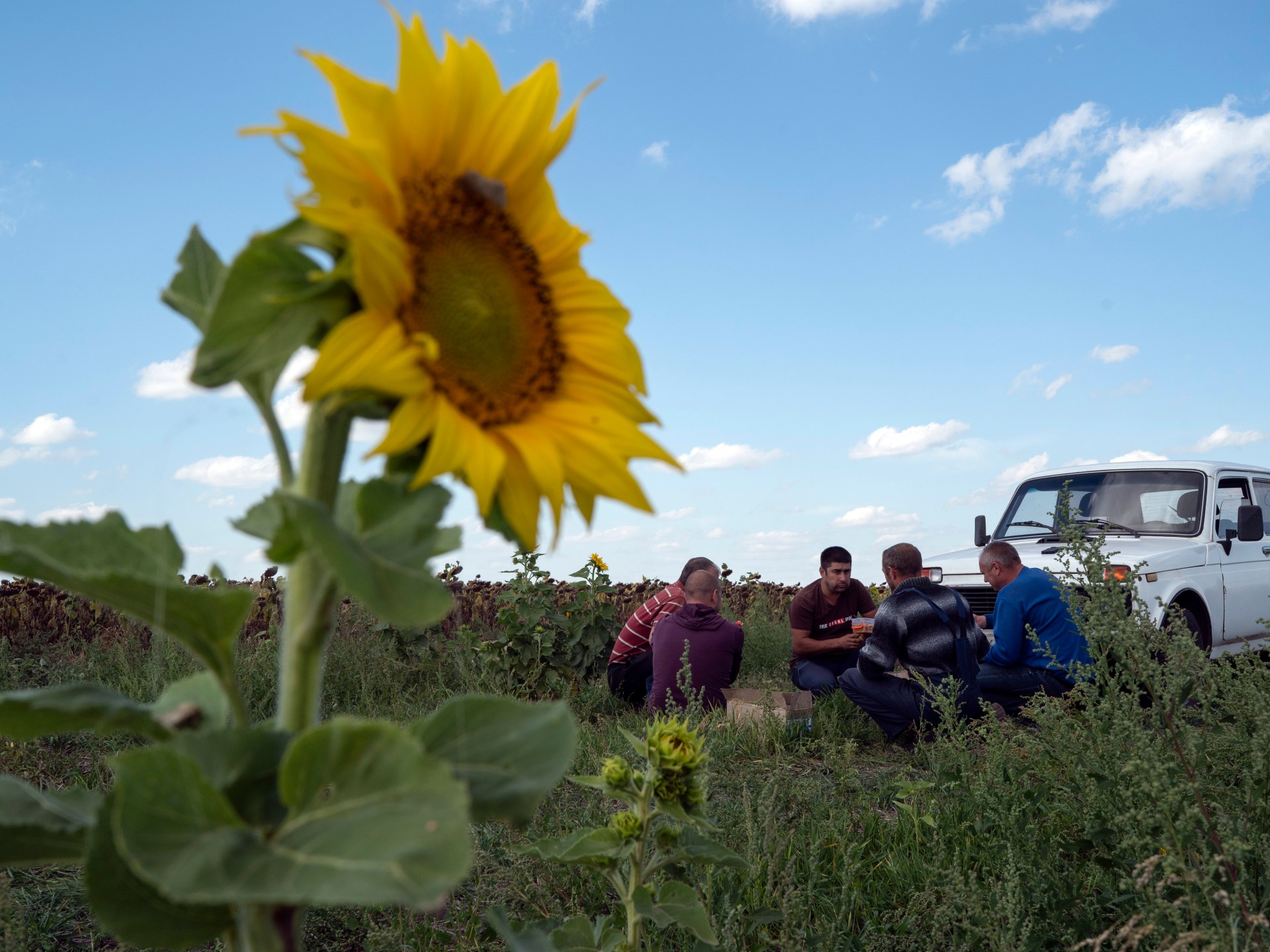 Novomykolaivka, Ukraine – An unexploded rocket sticks out of a field, and another is embedded in the ground of the farm compound. Workers found a cluster bomb while clearing weeds, and there is a gaping hole in the roof of the shrapnel-scarred livestock barn.

All work has halted on this large eastern Ukrainian farm, where fields and buildings have been hit so many times by mortars, rockets, missiles and cluster bombs that its workers are unable to sow the crater-dotted land or harvest crops like wheat.

Returning to planting and harvesting “will be difficult, very difficult”, said Viktor Lubinets, who handles crop production at the Veres farm. Even if the fighting ends, the fields must first be cleared of unexploded ordnance and shrapnel.

Agriculture is a critical part of Ukraine’s economy, accounting for about 20 percent of gross national product and 40 percent of export revenue before the war, according to the United Nations Food and Agriculture Organization. The country is often described as the breadbasket of Europe and millions rely on its affordable supplies of grain and sunflower oil in Africa, the Middle East and parts of Asia where many already face hunger.

The FAO estimated in July that preliminary damage to the industry ranges from $4.3bn to $6.4bn — 15 percent to 22 percent of the total value of Ukraine’s pre-war agriculture sector, estimated at $29bn.

But its location made it particularly vulnerable in what has been largely an artillery war. It lies in an almost direct line between the strategic city of Izyum, seized by Russian forces in early April and retaken by Ukraine in September, and Kramatorsk, the largest city in the eastern Donetsk region still in Ukrainian hands.

The farm complex has been hit 15 to 20 times, Lubinets says, and he has lost count of how many times the fields have been struck. The grain storage has been shelled, the electricity generation facility was destroyed, and multiple rockets rained down on the cattle barn — empty since the livestock was sold off as the war started. Of a pre-war workforce of 100 employees, most were evacuated and only about 20 remain.

Workers managed to plant wheat, but they did not have time to harvest it. The crops burned down during a bombing on July 2.

Some farms in the area have been luckier. Nearly 10km (6 miles) to the southwest of Novomykolaivka, a combine harvester moves methodically up and down a field, slicing dried sunflowers from their stalks and pouring their black seeds into waiting trucks.

The war forms a jarring backdrop. The machine is scarred by shrapnel from an exploding rocket, and a nearby field is mined. Helicopters skim over the sunflowers and corn, and fighter jets streak low above the rolling plains.