The spokesman for an anti-Zionist Haredi cult was recorded praising the IDF in a clip retrieved by The Times of Israel Wednesday, in what could threaten the extremist group’s ongoing efforts to seek asylum in the Islamic Republic of Iran.

The clip — a Zoom conversation recorded shortly after the war Israel fought with Hamas in Gaza in May — features Lev Tahor spokesman Uriel Goldman rejecting as a “joke” accusations that the IDF used excessive force during the 11 days of fighting.

“There [are] people who are always saying ‘how come you’re attacking children?’ There [are] casualt[ies] with children!’… It’s nonsense because you know how [Israel] care[s] about [these] things much more than Americans,” Goldman can be heard saying.

The clip was retrieved as the cult of roughly 280 members — among whom are citizens of Israel, the US and Canada — has begun gradually making its way from Guatemala, where they are based to Iran, sources familiar with the matter told The Times of Israel on Wednesday.

Relatives of the cult members and victims rights groups have notified the Israeli, US and Guatemalan governments of what they worry could be a “massive diplomatic incident” if Lev Tahor makes it to Iran, but authorities have been slow to act, one of the sources said.

“The Shalit deal will look like child’s play next to this,” one relative told the Ynet news site Wednesday, referring to the 2011 prisoner deal with Hamas in which Israel released 1,027 Palestinian terror convicts in exchange for soldier Gilad Shalit, who had been held captive since 2006.

???????? — PHOTOS: A family who is part of the Lev Tahor cult was stopped at the Guatemala airport while on their way to Iran. Their plan was to fly from Kurdistan and from there to Iran. They told police officers that they were being “persecuted” & therefore sought asylum in Iran. pic.twitter.com/8aCYZWSxaa

Lev Tahor filed a request for asylum in Iran in 2018, swearing allegiance to Supreme Leader Ayatollah Ali Khamenei and claiming that it faced persecution due to its anti-Zionist stances, according to documents presented to a US federal court in 2019.

In recent weeks, several small groups of Lev Tahor members have left Guatemala for the Middle East, seeking to enter Iran through its border with Iraqi Kurdistan, a source familiar said. Efforts by authorities and private investigators hired by victims rights groups have managed to temporarily delay the cult’s travel plans, with some of the members arriving at the airport in Guatemala to find that their passports have been rejected.

The Guatemalan authorities have already detained a number of the cult members who hold US citizenship and were allegedly on their way to Iran in recent days, after a request from American authorities, Ynet reported.

According to Yeshiva World News, which first reported on the cult’s attempted move to Iran in recent weeks, one of those already in Iraq was Lev Tahor spokesman Goldman, along with Amram Moshe Yosef Rosner and Yosef Hanoch Helbrans. 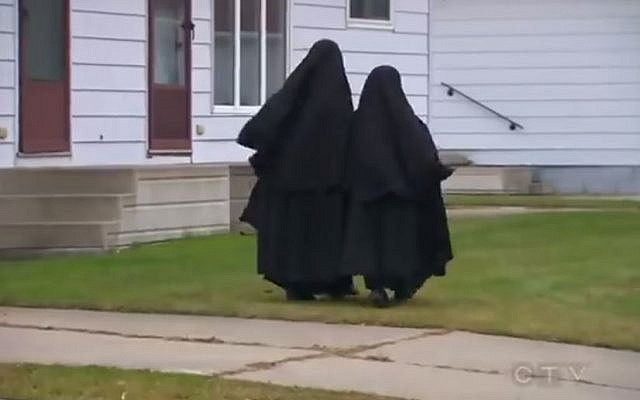 Goldman in the Zoom video this past summer could be heard mocking those who sympathize with the Palestinians. “We are laughing when they say, ‘Oh the Palestinians! So nebach (Yiddish for unfortunate). They’re attacking them.’ It’s a joke. Between me and you, everybody knows it’s a joke.”

Sitting next to Goldman and nodding along as he talks is Shmiel Weingarten, who was arrested in a joint raid by American and local Guatemalan authorities in July on suspicion of abusing and kidnapping children. Weingarten is said to be another influential leader in Lev Tahor.

The group has been described as a cult and as the “Jewish Taliban,” as women and girls older than 3 are required to dress in long black robes covering their entire body, leaving only their faces exposed. The men spend most of their days in prayer and studying specific portions of the Torah.

“Marriages” between minor teenagers and older members are common.