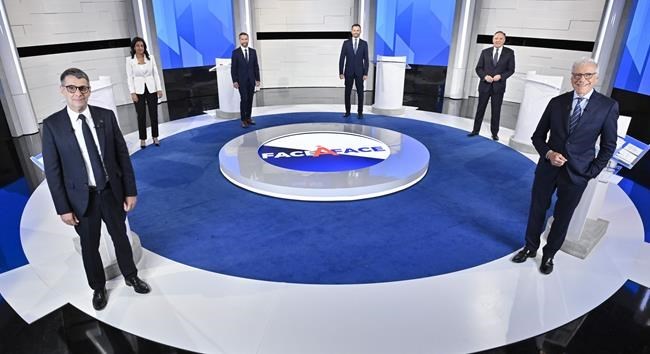 MONTREAL — Coalition Avenir Québec Leader François Legault faced a four-way attack on his environmental plan during the leaders debate Thursday, with his rivals suggesting he’s going against the current on the fight against climate change.

Legault, whose party has a commanding lead in the polls, seemed to focus his counterattacks on one opponent: Québec solidaire spokesman Gabriel Nadeau-Dubois, whose left-wing party is looking to replace the Liberals as official Opposition.

“I get the impression that it’s kind of like magic, kind of as if you were in a wonderland,” Legault said.

Nadeau-Dubois shot back: “Stop scaring people, you should be inspiring Quebecers, proposing solutions.”

Quebec aims to reduce its greenhouse gas emissions by 37.5 per cent by 2030 compared to 1990 levels, but the province missed its 20 per cent reduction target set for 2020 and instead reached just six per cent. Legault has said reaching those targets isn’t possible without a new hydroelectric dam, and he has suggested the four other parties’ plans aren’t achievable.

The Liberal Party of Quebec is proposing a 45 per cent reduction target over that same period. Québec solidaire, meanwhile, is aiming at 55 per cent.

During the section on cost of living, Legault once again took aim at Nadeau-Dubois, bringing up comments the Quebec solidaire leader made about “decreasing the growth” of certain sectors of the economy.

“Which sectors are you talking about?” Legault asked.

Nadeau-Dubois didn’t directly address the question but talked about how demand will soon decrease for fossil fuels, which he said would affect companies such as oil refineries.

Legault cut him off, “and what about the manufacturing industry?” The premier suggested Quebec solidaire’s ideas would negatively impact the economy.

Nadeau-Dubois accused Legault of using fear to make his arguments: “Stop taking out the Halloween decorations and scaring people.”

While Legault’s attacks were most frequently directed at Nadeau-Dubois, the premier focused on Conservative Party of Quebec Leader Éric Duhaime regarding mental health. The premier said Duhaime, whose party has gained support through its opposition to COVID-19 measures, was irresponsible.

“Because over the past two years, Mr. Duhaime has played the role of agitator who has profited from the suffering of people in Quebec,” Legault said, regarding Duhaime’s constant criticism of the government’s handling of the pandemic.

“He thinks that it’s not true that there were fewer deaths in Quebec; frankly it’s irresponsible.”

Duhaime accused Legault of being unable to admit that Quebec has a mental health problem related to the strict COVID-19 rules, which included a five-month curfew — the only such measure imposed in the country during the pandemic.

Legault asked if Duhaime would have been willing to sacrifice twice as many seniors by imposing fewer rules.

Duhaime replied, “You were irresponsible with the children of Quebec, Mr. Legault, never forget that.”

On the issue of tax cuts, the CAQ, Liberals and Conservatives all want to reduce them, while Quebec solidaire and the Parti Québécois do not. PQ Leader Paul St-Pierre Plamondon warned that the tax cut plans of the other parties could lead to austerity if there’s another recession.

“It’s a one-way trip toward austerity, and it’s a present for the richest,” said St-Pierre Plamondon, whose party is promising refundable tax credits.

“We are the party that is cutting taxes for the middle class and increasing them on people who can afford to pay more.”

The CAQ continues to enjoy a solid lead in the polls while the other four main parties are in a fight for second place. The French-language debate, hosted by Radio-Canada, is one of the last chances for the leaders of the Liberal, Québec solidaire, Conservative and Parti Québécois parties to make their pitch to Quebecers before the Oct. 3 vote.

Thursday’s contest was divided into five sections: the environment; the cost of living and the economy; health care; education and public services; and the French language, immigration and identity.

Some political analysts have said that while it would take a major misstep to knock Legault from the top of the polls, the debate remains important and any of the party leaders could face consequences from a bad performance.