AFP — The founder of the far-right group Oath Keepers and 10 others were indicted for seditious conspiracy in the January 6, 2021 assault on the US Capitol, the Justice Department announced Thursday.

It was the first use of the potent sedition charge in the sprawling investigation of the Capitol attack by supporters of then-president Donald Trump.

Stewart Rhodes, 56, who founded and led the right-wing militia group, and another associate of the organization, Ed Vallejo, were arrested early Thursday.

Nine men with ties to the Oath Keepers who had been previously arrested on lesser charges in the violent attack, which temporarily shut down the US Congress, were also named as part of the alleged seditious conspiracy.

“Following the Nov. 3, 2020, presidential election, Rhodes conspired with his co-defendants and others to oppose by force the execution of the laws governing the transfer of presidential power by Jan. 20, 2021,” the Justice Department said in a statement.

It said that, in an effort to prevent Congressional certification of Joe Biden’s victory over Trump in the presidential election, they made plans for “breaching and attempting to take control of the Capitol grounds and building,” it said.

While they did that, it said, some Oath Keeper members remained stationed just outside of Washington with weapons and ammunition, ready to bring them to the capitol as reinforcements if fighting escalated.

They were the first of the more than 725 charged in the Justice probe to be accused of sedition, a very rarely used charge that alters the perception of the attack, which Republicans have sought to play down.

The indictment was unveiled on the same day that the parallel investigation into January 6 by a special House committee issued subpoenas for records from social media giants Youtube, Twitter, Facebook and Reddit, all of which were used to plan and carry out the attack, according to the committee.

The committee is trying to see if Trump or members of his circle had a role in planning or encouraging the violent attack, and has also subpoenaed Trump advisors and aides, as well as t top republican lawmaker who communicated with Trump on January 6.

Rhodes has openly led the Oath Keepers since he founded the group in 2009. He is a former Army paratrooper and graduate of Yale Law School, and was on the staff of former congressman Ron Paul, a prominent libertarian. 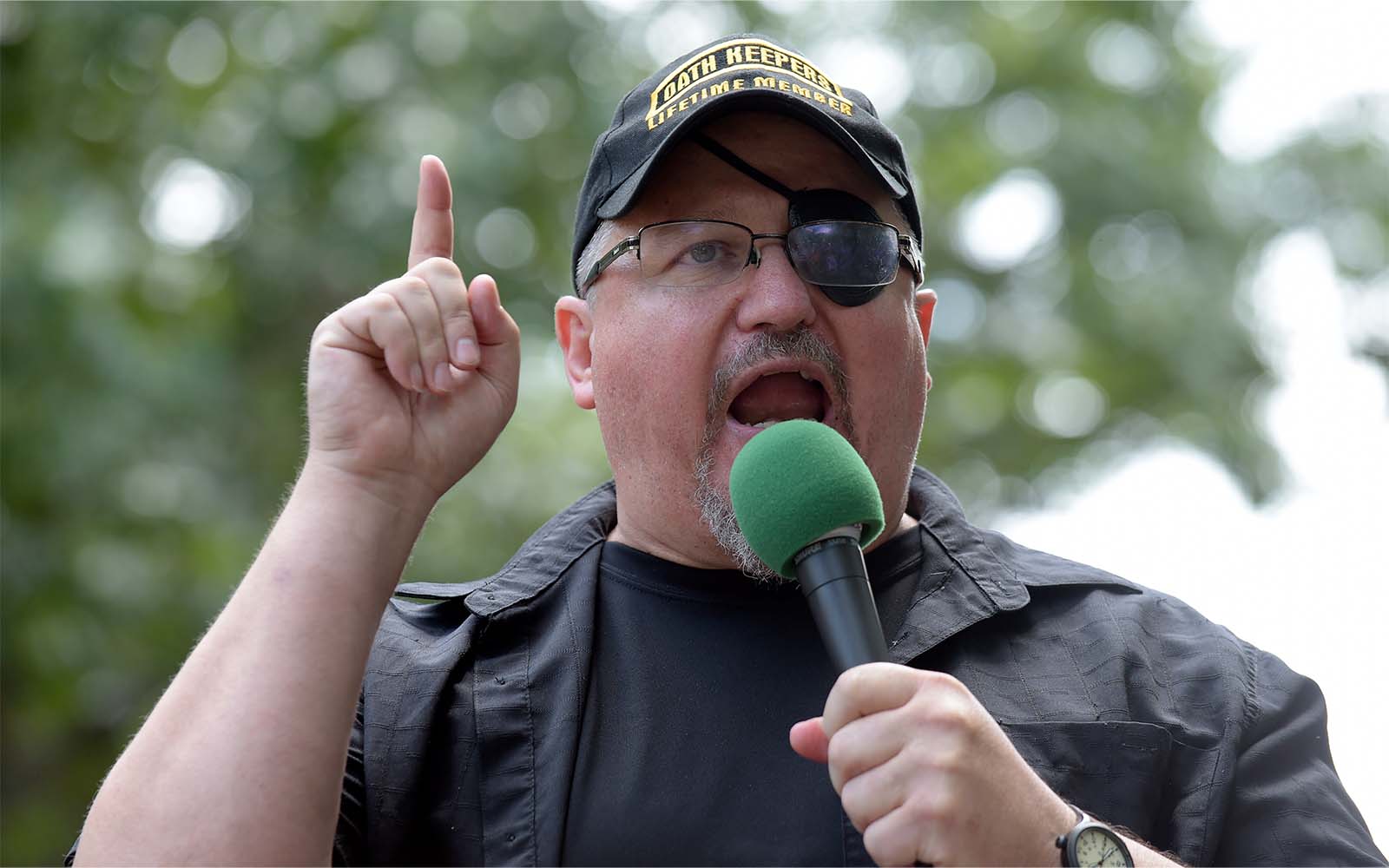 Stewart Rhodes, founder of the Oath Keepers, speaks during a rally outside the White House in Washington, June 25, 2017. (AP Photo/Susan Walsh, File)

The group is only loosely organized around the belief that the federal government is growing too powerful and can be removed by force under certain conditions, according to a recent report on them published by the Combating Terrorism Center (CTC) of the US Army’s West Point military academy.

“Conspiracy theories have always been a feature” of their ideology, the report said, and they have regularly shown up in combat gear and heavily armed at politically charged protests, in shows of force that critics label as intimidation.

The group has targeted for recruitment primarily current and former military, police and first responders. A recently leaked database had 38,000 names of people who had registered with the Oath Keepers at one point or another.

The indictment detailed the group’s planning from text messages and chats between members beginning from the election in November 2020 through the day of January 6.

Two days after Trump’s defeat, Rhodes convened Oath Keepers leaders in an encrypted chat and told them, “We aren’t getting through this without civil war.”

He issued a call to action, and on December 11 told the group that if Biden became president, “It will be a bloody and desperate fight… That can’t be avoided.”

Rhodes spent $18,000 ahead of January 6 on firearms, ammunition and other equipment including gunsights and night-vision gear for his group, the indictment said.

The indictment focuses on the way they formed two “stacks,” combat-like formations, to force their way past police and into the Capitol on January 6.

They also designed routes for their multiple, armed “QRFs,” or “quick reaction forces,” overseen by Vallejo, to come to their aid from the Washington suburbs if fighting broke out.

Those charged Thursday face up to 20 years in prison on the conspiracy to sedition charge alone. Most also face other charges such as assault on law enforcement and disrupting Congress.