“Foreign Minister Yair [Lapid] was kind enough to invite me to visit Israel and I’m going to visit soon to meet a friend and also a partner,” bin Zayed said during a press conference alongside Lapid and US Secretary of State Antony Blinken.

He added that Israel and the UAE should “not only celebrate this relationship, but look at new venues of cooperation.” Bin Zayed also said he was “excited” by recent news of Israeli leaders meeting with Palestinian Authority officials.

“This is a good start,” he said. “We have to keep encouraging them, but also in broadening the opportunities for them.” Bin Zayed said the UAE-Israeli relationship “will be not only a way of encouraging our two peoples, but beyond, in the region. So I look forward to seeing you, Yair, in Israel soon.”

Lapid responded to bin Zayed: “My house is open to you. You know that. And my wife is expecting for you to come over for dinner.”

The Israeli foreign minister visited the UAE in late June to inaugurate diplomatic missions in both Dubai and Abu Dhabi, and to meet with bin Zayed, who has yet to visit Israel. 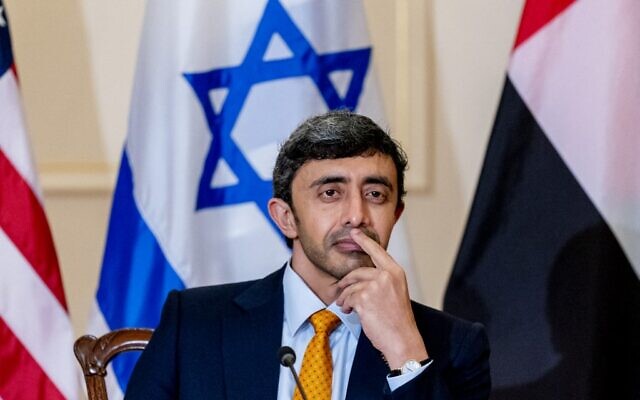 The three top diplomats gave a press conference following a tripartite meeting held at the State Department Wednesday to “review the progress that’s been made in the past year in the normalization of relations, and what more we can do together to shape a more peaceful and prosperous region,” said Blinken.

Lapid told reporters that he and bin Zayed “have become friends and partners” in a relationship “based on economics, progress and technological excellence.” He added that the partnership “isn’t just between Jews and Arabs, but between citizens of the world who want to be partners in the fight against climate change, against poverty, against the pandemic that has taken the life of millions.”

Blinken also noted that normalization efforts are “profoundly in the interests of the people in the countries in question, and is providing all sorts of new opportunities, as evidenced by the extraordinary jump in tourism, the business relationships that are being built every single day, the work that our countries are doing together increasingly in a wide variety of areas.”

The bulk of Lapid’s one-on-one meeting with Blinken and his three-day trip to Washington was centered on Iran. At the press conference, he said that “other options are going to be on the table if diplomacy fails” in containing Iran’s nuclear activities. “By saying other options, I think everyone understands, here, in Israel, in the Emirates, and in Tehran, what is it that we mean.”