Many Likud politicians who have butted heads with party leader Benjamin Netanyahu have found themselves outside the faction’s graces in short order. Some have started political careers elsewhere, others have taken a break from the rough and tumble of the Knesset altogether. Few have found their way back in from the cold.

But among the candidates with a realistic chance of making it into the Knesset following the November 1 vote is a once-familiar Likud face: Danny Danon, a former senior politician now slotted into the party’s 15th slot on its Knesset slate.

Despite their previous run-ins, Danon said he and Netanyahu have “learned to appreciate one another in a different way,” during an interview with The Times of Israel in Ra’anana last week. Yet Danon also questions whether it may be time for a new leader depending on the results of the November vote.

Should Netanyahu not manage to form a coalition in November, it “would be a legitimate question” within the party whether or not to replace him, said Danon.

Danon twice challenged Netanyahu for the party’s leadership and lost both times. In 2014, he was removed by Netanyahu from a deputy minister position after criticizing the then-prime minister’s handling of Operation Protective Edge against Hamas in the Gaza Strip.

Months after his second failed Likud leadership bid in late 2014, Danon was appointed Israel’s ambassador to the United Nations.

It was a prestigious appointment, but also a form of political exile, pushing Danon from the halls of power and physically distancing him from the party’s base. With the appointment, Netanyahu hampered Danon’s power as a critic and challenger within the party.

Now back from five years in New York and currently serving as the chairman of the Diaspora outreach organization World Likud, Danon is poised for a political comeback and is widely expected to enter the Knesset again after the November 1 election.

Like the four elections since 2019 before it, the upcoming vote is seen largely as a referendum on Netanyahu, who hopes to return to power with the support of a right-wing religious coalition. That puts Danon in the somewhat awkward spot of having to ride the coattails of a leader he has criticized and who sent him to political Siberia. 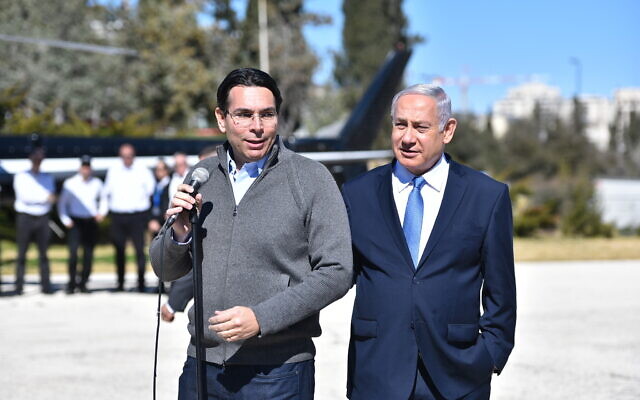 Israel’s notoriously unreliable but politically influential polls predict a stalemate, with neither Netanyahu’s right-religious alliance nor the bloc of parties opposing him offering a straightforward path to a majority.

Danon sat down with The Times of Israel to discuss his take on some of the upcoming election’s most burning issues, including the Likud’s future, why he’s not worried about forming a government that includes far-right politicians as ministers, his support for extending Israeli sovereignty to the West Bank, and his criticism over the current government’s handling of Iran and its nuclear ambitions.

Replacing Netanyahu after a failed election is a ‘legitimate question’

Netanyahu is liable to face pressure within his party and the larger bloc of far-right and Haredi factions should he fail to return them to power after November’s election. Earlier this summer, a poll published in Mishpacha, a Hebrew-language magazine geared toward the ultra-Orthodox, found that 51% of Haredi Israelis prefer that Netanyahu move aside if he fails to form the next coalition.

Within the Likud, brief excitement to supplant Netanyahu subsided after the on-trial Likud leader eschewed a plea deal. All parliamentarians eventually fell in line behind him as Likud’s leader, including senior lawmaker Yuli Edelstein, who only repealed his bid for the party’s leadership in June.

But Danon has not dismissed the idea.

Danon noted that Likud has traditionally held onto its leaders, with only Menachem Begin, Yitzhak Shamir, Ariel Sharon, and Netanyahu heading the party since it was founded in 1977.

“At the UN, I spoke with many leaders. I didn’t find a precedent of a party that in the last 75 years had only four leaders, worldwide. Only the Likud party,” he said. 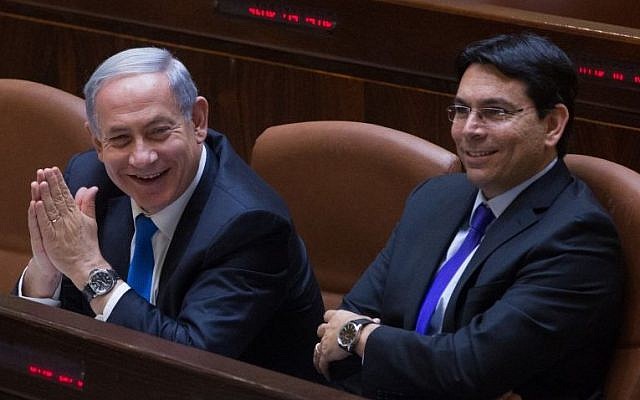 Danon said he sees himself as “part of the future leadership of the party, after Netanyahu,” and implied that he aspires to one day ascend to the premiership himself.

Others in the party have been more reticent about speaking about a leader other than Netanyahu. Last week, Likud faction director and Netanyahu confidant Yariv Levin dismissed questions about whether his party has alternative plans for leadership should Netanyahu fail to form a government this fall.

“He is our candidate for prime minister,” Levin said of Netanyahu, after submitting Likud’s slate to the Central Elections Committee.

The party’s decision to stick with Netanyahu has narrowed the list of parties it can likely turn to in coalition negotiations, with factions from the right, center and left running on promises not to empower the thrice-indicted Likud leader, though some, like Defense Minister Benny Gantz’s National Unity, remain open to working with the party should another lawmaker take the helm.

Danon stressed that he thinks Likud is in a good position to form a government, and that he would be in favor of broadening a potential coalition by including Gantz and “parts” of National Unity in the next government. 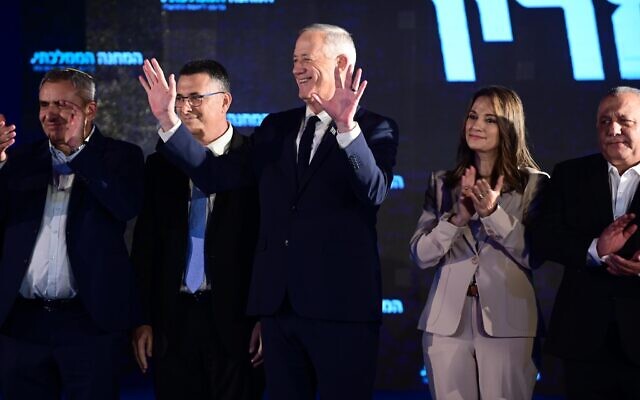 He also said he’d potentially welcome Gantz’s current political partner Gideon Sa’ar, who fled Likud after losing a 2019 party leadership bid, if he “accepts the ideas of the future government.”

Likud’s own Knesset slate was finalized only last week, but its August primary results threw commentators in a tailspin after voters punished established party parliamentarians and rewarded some of Likud’s loudest voices.

From the perspective of seven years out of the Knesset, Danon said that he has returned to a more boisterous political scene.

“I think it’s not only about the Likud, I think politics in Israel, in general, has become more vocal,” Danon said, adding that when he left, the general political volume “was 5 out of 10, today, it’s a 9 out of 10.”

One of the political scene’s loudest and most inflammatory voices is far-right Otzma Yehudit leader Itamar Ben Gvir, an extremist West Bank settler whose bellicose anti-Arab rhetoric and ultra-conservative positions have made him one of the most popular politicians in Netanyahu’s bloc.

Centrist and left-wing politicians, most recently Labor leader Merav Michaeli, have warned that Ben Gvir, a former protégé of the late extremist politician Meir Kahane, could be given a ministerial post in the next government.

Danon said that he prefers not to frame the discussion that way, because while coalitions may include political extremes, the weight of policy should be set by Likud. 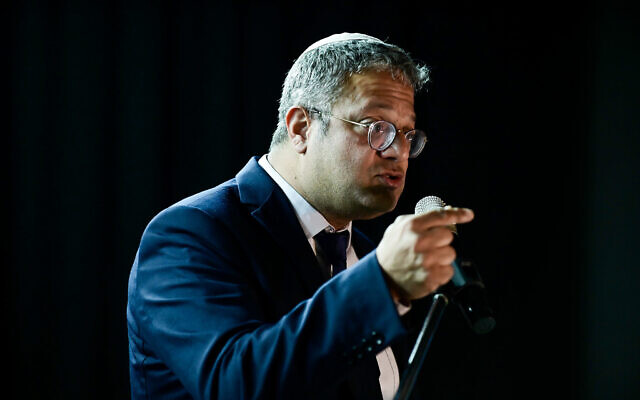 “Ben Gvir [will be] a part of a coalition party, the same way that Meretz is today a part of the coalition with no one focused on the ideas of Yair Golan from Meretz. Radical ideas, absurd ideas,” Danon said, drawing a parallel with the prominent former general and left-wing MK whose views have been criticized by parties on the right and the center.

“I think the goal of the parties from the left is to make the discussion about Ben Gvir, and we should not cooperate with that. The prime minister will be Netanyahu and not Ben Gvir,” he continued, adding that “policy would be run by Likud.”

Push to apply Israeli sovereignty over the West Bank

One area in which Danon’s ideology dovetails with Ben Gvir’s is the extension of Israeli sovereignty over the West Bank. Danon has long supported annexing the West Bank, where some 3 million Palestinians live, and in the past said that he is against Palestinian statehood. 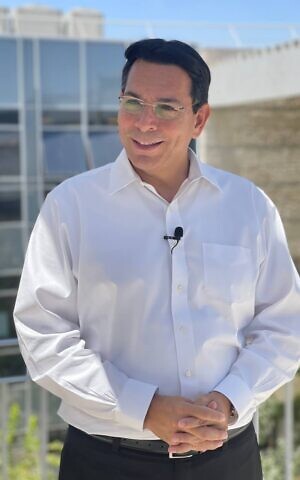 He called for immediate annexation of large settlements and blocs Israel is thought likely to hold onto in any possible deal with the Palestinians as an interim step, echoing a position held by other prominent pro-settlement Likud politicians.

“We know that Ariel and Maale Adumim and Gush Etzion are not going anywhere,” he said. “So why not apply sovereignty there and we can move forward on other parts.”

Danon was less certain of what to do with the Palestinians that would remain under Israel’s thumb in the absence of a two-state solution, calling the issue “very sensitive.”

“We don’t want a terror entity in our backyard,” Danon said. But he added, “we don’t want to run the day-to-day life of people in Jenin and Nablus and Ramallah.”

On foreign policy, Danon claimed that Prime Minister Yair Lapid lacked experience in diplomacy, claiming that the current government’s strategy in opposing a resumption of the Iran nuclear pact had been mistaken, despite a deal appearing to now be off the table.

Lapid and other senior officials worked quietly behind the scenes with Americans and Europeans in hopes of influencing or quashing any emerging agreement to revive the 2015 pact with Iran, only directing comments publicly when a “bad” deal for Israel was reportedly close to finalization in recent weeks.

That approach contrasted sharply with Netanyahu, who loudly declaimed the deal when it came together in 2015, creating a massive rift with the White House but failing to stop the US from joining the agreement. A nadir in ties between Jerusalem and Washington eventually led to the US withholding its veto in the UN Security Council on an anti-Israel resolution, on Danon’s watch. 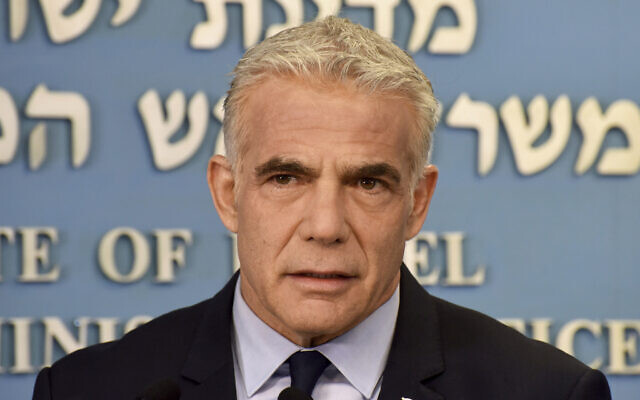 Prime Minister Yair Lapid speaks about Iran at a security briefing for the foreign press at the Prime Minister’s office in Jerusalem, Wednesday, August 24, 2022. (Debbie Hill/Pool via AP)

“I think Lapid is inexperienced,” Danon said of the nearly-three month prime minister, who has held the post of foreign minister for the past year. “Whether you like him or not, you cannot argue with that fact. I think that our adversaries are taking advantage of that. Take for example the issue of the Iran deal which he chose to be quiet about for almost a year. What he said in the last month was very good, both him and [Defense Minister Benny] Gantz, but too little too late.”

“They should have been vocal and active against the Iran deal from day one in office and brought together all those who are against that agreement, including our partners in the region,” Danon said.

He said other countries in the region, which he declined to name, were “concerned and confused” about Israel’s position.

“Moderate Arab leaders were against the Iran deal and expected Israel to take a leading role against it, which we didn’t,” he said. “I think it was a mistake. I think being silent is not policy and I think Lapid made a major mistake on this issue.”