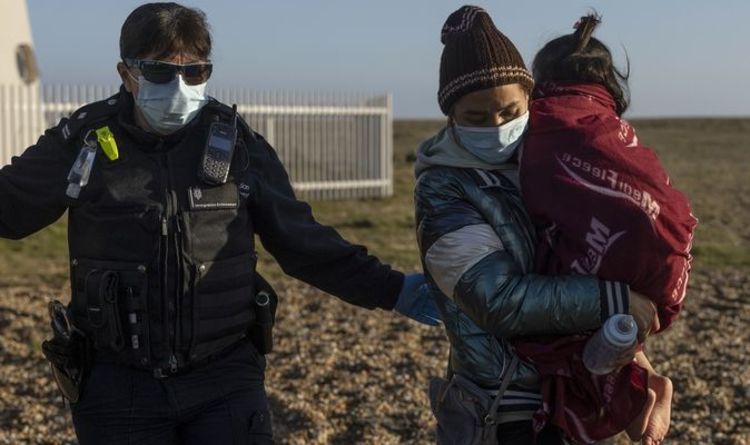 Tom Sharpe said 10 sensors with “thermal-imaging cameras and radar” could be spread between Hastings and Ramsgate to detect any migrants crossing in tiny dinghies. Mr Sharpe said the “cheap” technology was available “today”, as MPs were also warned there was no spare capacity for Navy vessels to stop illegal immigrants in the Channel. He also warned deploying Navy ships to the Channel would seriously damage its worldwide reputation as it became a taxi service for migrants.

His comments came after the Prime Minister signed off on plans for the military to take over command of the operation from Border Force. The ex-Navy man told the defence select committee yesterday: “I would challenge the view that surveillance at sea is the answer.

“In fact, it’s at shore. There are technical solutions to saturating the Channel that are very readily and cheaply available today to ensure almost nothing crossed. A tiny radar cross section with a very high heat signature, for example. You would need about 10 of these sensors and they bring in all data, not just radar.

“They bring in optical cameras that can see into Calais harbour, they have got thermal-imaging cameras, they have got radar. You can allocate your resources rather than playing whack-a-mole.” But he said using the Navy would merely lure more migrants wanting safe passage for the final stretch of their journey.

He said: “That’s exactly what happened in the Mediterranean where boats were put to sea with 12.1 miles of petrol and the phone number of the nearest navy ship. When they ran out of fuel, they rang and were taken to safety.There’s a reputational impact to this.”

The Ministry of Defence will now begin working with the Home Office to address Channel crossings, which have totalled more than 1,000 since the start of the year. The committee heard the Royal Navy has 14 Archer-class patrol vessels, which would have to be taken away from training officers.

Mr Sharpe added: “In terms of what the Navy’s got right now, there is no fat, there is no spare capacity.” But Vice Admiral Sir Charles Montgomery, a former Second Sea Lord and director general of Border Force between 2013 to 2017, said the Navy would be “very useful”. He added: “The Government has reached a judgment that the Navy will be in a better place to lead this operation, better than Border Force.”