A Palestinian man suspected of killing an elderly woman in Holon earlier this week reportedly received a permit to enter Israel despite Palestinian doctors raising alarms about a violent mental health incident a month ago.

Mousa Sarsour is accused of bludgeoning Shulamit Rachel Ovadia, 84, to death as she walked down a street in the central Israeli city in broad daylight Tuesday, in an attack that officials described as nationalistically motivated.

Police eventually tracked him to a Tel Aviv building, where he was found dead after apparently taking his own life.

Sarsour, 28, had been in Israel legally on a permit that allowed him to seek employment.

However, leaked documents published by the Kan public broadcaster Thursday show that he held the permit despite doctors having referred him for psychiatric care at a hospital in Bethlehem under police protection a month before the killing.

The recommendation was made after Sarsour violently threatened medical staff during an examination, refusing to relent even once Palestinian police had arrived at the scene, according to Kan. 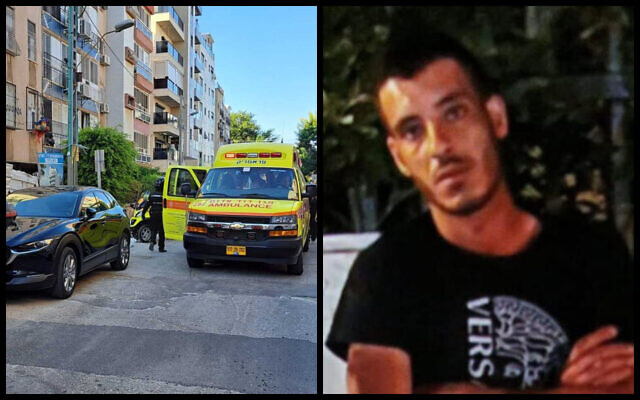 Left: The scene of the murder of an 84-year-old woman in Holon, September 20, 2022. (Magen David Adom); Right: The suspect in the attack, named by police as Mousa Sarsour of Qalqilya. (Israel Police)

Palestinian officials say Israel allowed Sarsour to obtain the permit despite evidence of his unstable mental state and proclivity to violence.

Israel’s Shin Bet security agency runs background checks on Palestinians from the West Bank and Gaza applying for permits to enter Israel, usually for work, to determine if they pose a security threat.

However, applicants are not normally examined for mental fitness unless a specific concern is flagged.

It was not immediately clear when Sarsour obtained the permit and if it was following the episode. Israel says attacks by permit-holders in Israel are exceedingly rare.

Reports in the Israeli and Palestinian press have differed over whether Sarsour was from the Palestinian city of Qalqiliya or a village called Sarta to the southeast.

Sarta Mayor Ibrahim Hatib told the Haaretz newspaper that Sarsour had worked in Israel intermittently from a young age. He described Sarsour as someone known to have suffered from mental instability.

A relative of Sansour’s told the Ynet news site that “Mousa is a very shy and quiet person — he hardly even talks to his family members. There are things we don’t understand and we will wait for the results of the investigation.”

Ovadia was killed by blows to the head from a blunt object on Hahashmona’im Street in the Tel Aviv suburb. Police were called to the scene after a neighbor heard her screams, arriving to find her seriously wounded.

CCTV footage showed a man in dark clothes trailing Ovadia as she walked toward her house, then attacking her from behind, landing multiple blows and fleeing the scene.

Nothing was stolen from her, leading officials to conclude the attack had been nationalistically motivated terror.

Prime Minister Yair Lapid, in New York for the United Nations General Assembly, condemned the attacker as a “despicable and cowardly terrorist who murdered an elderly woman who could not fight back.”