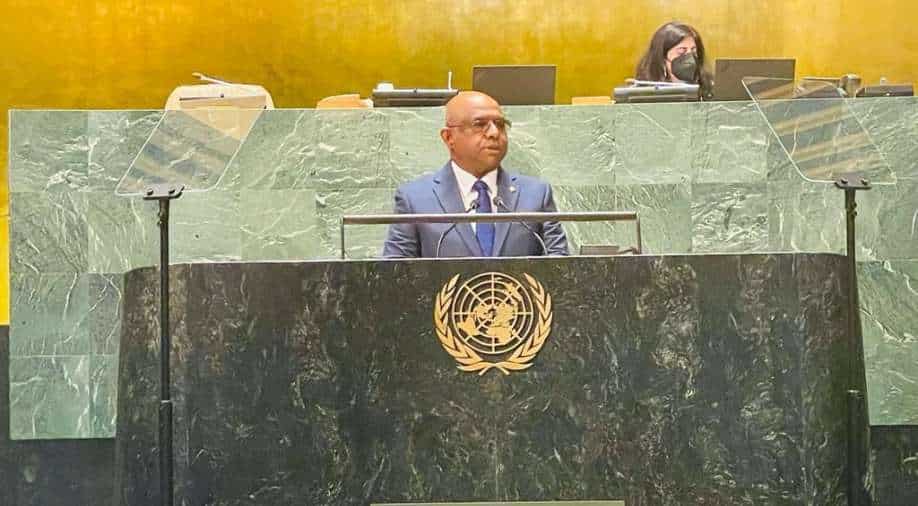 In a first, the President of the United Nations General Assembly (UNGA), Abdulla Shahid, has called for formalization or “text-based negotiations” when it comes to reforms at the United Nations Security Council (UNSC). So far, no president of the UNGA has specifically mentioned about text-based negotiations in such clear terms when it comes to the reforms at the key UN body, which last saw a major expansion in 1965.

In his address on Tuesday at the inter-governmental negotiations (ING) meet, Abdulla Shahid said, “Would encourage all delegations to work tirelessly to further narrow down the divergences and gradually move the process towards text-based negotiations.”

What is significant this time is that his letter also, for the first time since the commencement of the IGN, makes a strong emphasis on the process to “gradually move” to “text-based negotiations using the Co-Chairs Elements Paper and the Framework Document of 2015.”

Intergovernmental Negotiations Framework (IGN) is a group within the United Nations that looks into UNSC reforms but has made no significant progress since 2009 when it was formed. The group’s conversations are considered “informal” in nature, due to the lack of single text and thus, UNGA rules of procedure don’t apply. But in 2015, a framework document was agreed when it comes to the reform which can be the basis for future talks.

The IGN during the 76th session ended with all member states joining consensus on the UNGA President’s oral decision to roll over the text to the next session. During the address, he highlighted the need to “make the Security Council efficient, effective, representative and accountable” and member countries have a “collective responsibility to demonstrate that the IGN is working and not let the process turn into a Sisyphean exercise.”

President Abdulla also pointed out that there was “no permanent representation for the entire African continent” and stressed the need for a “comprehensive reference to the Common African Position”.

Naturally, the development is music to ears for India which has been long calling for text-based negotiations for reforms, leading to more substantive discussion on the reforms.

India along with Japan, Germany and Brazil, part of the G4 countries, have been calling for urgent UN Reforms. The coffee group of Uniting for Consensus (UFC) group, led by Italy has Pakistan, Turkey as its members aims to counter bids by the G4 countries.

China’s envoy to UN Ambassador Zhang Jun in his intervention said that letter circulating the oral decision was a clear break from the past. The letter to member states appears to have unruffled the calculations of these delegations with some of them plainly mentioning that the membership is not ready for text-based negotiation. In effect, it has made it clear who is in favour of reforms and who is against.