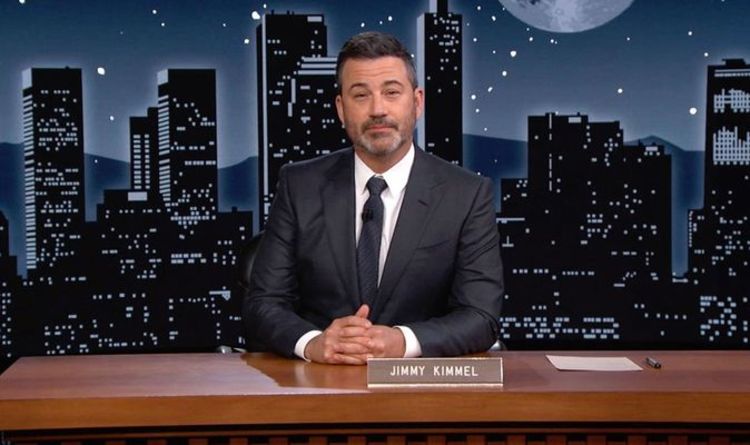 In the latest episode aired on Thursday, the 54-year-old comedian played the leaked moment when the two Australian news anchors were seen candidly talking about the world-class tennis player and joked that ‘all news’ should be that unfiltered. The leaked clip showing Rebecca Maddern and Mike Amor made headlines after they were caught calling the world’s number one tennis pro an “a***hole” while unaware they were being recorded.

Ms Maddern is seen saying to her colleague: “Whatever way you look at it, Novak Djokovic is a lying, sneaky a***hole.

“That’s it, I mean he’s an a*hole. He got a bullst f*ing excuse and then fell over his own fing lies.

Shaking his head and fiddling with his audio pack, Mr Amor said: “It’s just what happens, right, that’s what happened.”

Kimmel kicked off the show by talking about the latest visa debacle between the Australian government and Mr Djokovic.

He addressed the audience and said: “Have you been following the legal battle between Novak Djokovic and the Australian Government?”

Before introducing the clip, he said: “It’s a very big story Down Under, and one that led to this exchange on TV news where these anchors were apparently unaware they were on the air.

“Why isn’t all the news like that? I would watch the news every night.”

He continued joking and said “‘I think he’s an a***hole … Now let’s check in with Ron in the Channel 9 weather centre.’”