A Palestinian teenager was killed as heavy clashes broke out in Nablus late Wednesday and early Thursday while Jewish worshippers held a monthly pilgrimage to a shrine in the Palestinian West Bank city under military guard.

The visit to Joseph’s Tomb came a week after the city saw rare daytime gunbattles between troops and Palestinian fighters. It was the first trip to the shrine since late June, when Palestinian gunmen opened fire on pilgrims, wounding a senior Israel Defense Forces officer and two civilians.

Wassim Khalifa, 19, was shot by a sniper during the clashes and rushed to a hospital before succumbing to his wounds, Palestinian media outlets reported, citing the Palestinian Red Crescent rescue service.

Khalifa was from the Balata refugee camp in Nablus, according to reports.

Dozens more were injured, including at least one person hospitalized in serious condition, the al Quds news site reported. Most of the other injuries were for tear gas inhalation.

The IDF did not comment on the clashes, but confirmed in a statement that troops from the army and border police were securing a coordinated pilgrimage.

The fighting broke out as a convoy of Jewish worshippers and IDF soldiers entered the city for a monthly visit to the tomb, revered by some as the final resting place of the biblical Joseph, where they met with resistance from locals.

Clashes during the visits are commonplace; Palestinians routinely throw rocks at the troops, and frequently attack them with Molotov cocktails and gunfire.

No injuries were reported among Israelis, though a bullet struck an armored bus used by the Israeli group.

Heavy bursts of gunfire could be heard in footage from the scene which were shared on social media.

It was not clear if the Israeli convoy had exited the city as of publication.

The clashes came with the city already on edge following a rare daytime raid on August 9, sparking a number of gunbattles. Israeli forces killed wanted terror chief Ibrahim Nabulsi during an exchange of fire outside his home. Two others were killed and forty more were injured in the clashes.

Nabulsi was part of an Islamic Jihad squad that had committed several shooting attacks against soldiers and civilians in the West Bank earlier this year, according to the Shin Bet. The IDF said that included a shooting at the Joseph’s Tomb complex, where there have been several attacks recently.

Tensions have been high at the site since April, when some 100 Palestinian rioters broke into the shrine and vandalized it. 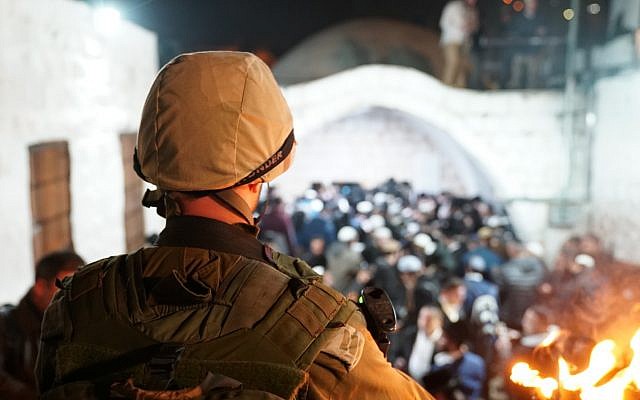 A day after the vandalism, two Jewish men were shot and lightly to moderately hurt while trying to reach the tomb to restore it. Israel later carried out major renovation work at the site.

On June 29,  Samaria Regional Brigade Commander Col. Roy Zweig, who was involved in the site’s rehabilitation, was shot along with two civilians as Palestinians directed heavy gunfire at the shrine compound during a monthly pilgrimage. All three suffered light injuries.

Two weeks later, an Israeli man was shot and lightly injured while trying to reach the site with three others in an uncoordinated visit.

Joseph’s Tomb is located inside Area A of the West Bank, which is officially under complete Palestinian Authority control, though the Israeli military conducts activities there. The IDF bars Israeli citizens from entering Area A without prior authorization.